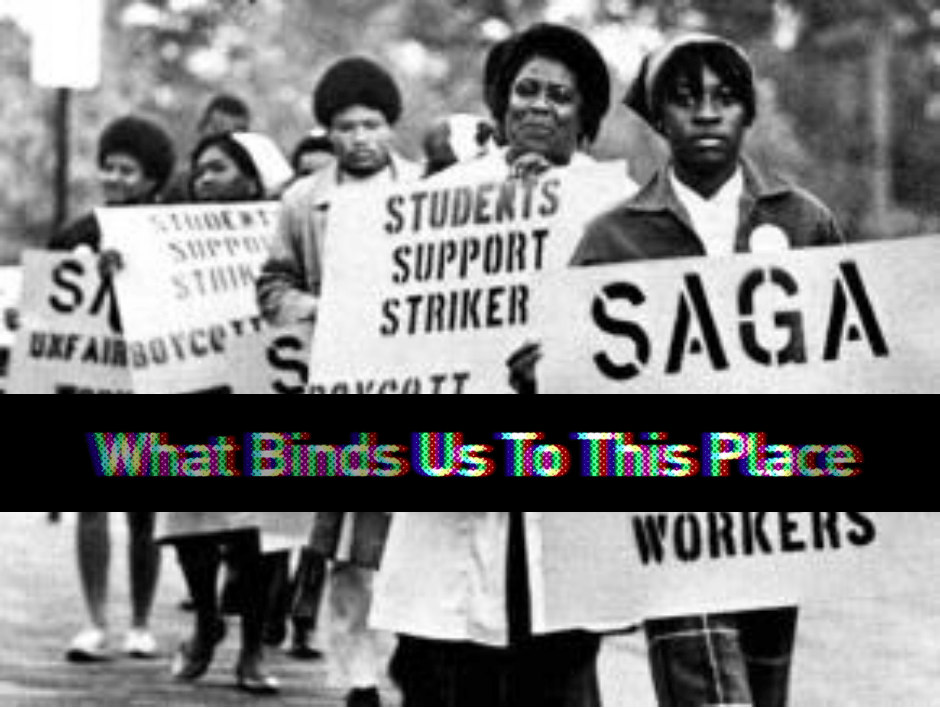 With the ongoing Black Lives Matter protests in the US (and now the UK) following the murder of George Floyd by a police officer in Minneapolis, we republish this review by Demetrius Noble for Rampant on the documentary film What Binds Us to This Place, made by American comrades of Clarion editors.

The documentary examines North Carolina’s rich history of anti-racist struggle. You can watch it here.

The right questions generally prompt more questions. Such is the case with the weighty inquiry What Binds Us to This Place? This haunting question also serves as the title for a documentary by Joel Sronce and Matt Brown exploring the horrid conditions of low-wage food service workers in North Carolina and the powerful history of struggle and resistance once waged by these workers on various college campuses throughout the state in 1969.

What Binds Us to This Place? (WBUTP) begins with the voice of a lone worker lamenting the ever-increasing costs of surviving relative to a state that refuses to pay its workers a living wage. The worker struggles to articulate how and why this could happen, literally becoming speechless. “The price of living is going up. The price of everything is going up. I felt the state of North Carolina would make these wages where it’s feasible for everybody to live, but I guess that’s not the case. It’s like . . .  (breathing and silence). It’s like . . . (heavier breathing followed by more silence and then an exasperated sigh).”

Following this audible aggravation, WBUTP immediately cuts to a Civil Rights montage of people resisting and protesting. The protestors are joined by cafeteria workers as the documentary splices footage of food service workers cooking, serving food, and ringing up orders. These historical photographs and videos of protestors and cafeteria workers are disrupted by the grievances of a young Black woman who is a University of North Carolina–Greensboro cafeteria worker in 2019. She interrupts the montage to angrily proclaim, “It feels fucking awful,” and, “They want to own you.”

WBUTP’s opening montage oscillates between past and present and constructs a layered juxtaposition between militant, organized workers galvanized by the force and energy of a larger mass movement for social justice and then exploited, dejected workers today who have yet to summon the inspiration, courage, and hope of the 1969 eruption of wildcat strikes led by cafeteria workers at the respective campuses of University of North Carolina–Chapel Hill, North Carolina State University, University of North Carolina–Greensboro, and North Carolina A&T State University. These tensions between past and present, radical social justice movements and social inertia, underscore the documentary’s commitment to dialectical materialism and powerfully amplify the question What Binds Us to This Place? This question begets more questions, like who is us and where is this place?

These subsequent questions are interconnected. To properly identify us necessitates that one accurately frame this place. Starting with the latter pushes one to WBUTP’s revolutionary core as the documentary contextualizes this place within two contradictory social milieus: one energized by radical social upheaval and the other maimed by the ravages of neoliberalism and austerity politics. Indeed, 1969 marked an intense period of social unrest as the Civil Rights movement gave way to the more militant and emergent leftist contours of both the Black Power and Antiwar movements. The outbreak of strikes that occurred across several North Carolina college campuses within a matter of weeks in 1969 cannot be understood outside of this context. The cafeteria and food service workers—primarily Black women—leading these strikes were informed and emboldened by the larger mass movements for social justice developing around them.

With a decade of unwavering Civil Rights struggle still fomenting across the American South, the workers at UNC Chapel Hill’s Lenoir Dining Hall walked off the job on February 23, 1969, and didn’t return until all North Carolina state employees realized a robust raise (in terms of actual purchasing power this raise was the highest the minimum wage has been in North Carolina since 1969!). The workers maintained their strike for over a month and didn’t waiver when the state dispatched the National Guard to the campus of UNC Chapel Hill with the intent of bullying and terrorizing Lenoir Dining Hall’s cafeteria staff of mostly Black women back to work for low wages.

Over the next four weeks while Lenoir Dining Hall workers were still on the picket lines, they found themselves joined by militant food service workers going on strike at NC State University, NC A&T State University, and UNC Greensboro. These labor struggles for higher wages and basic human dignity and respect were fortified by radicalized Black and white students and amplified by the support of regular citizens residing in neighboring communities who were also galvanized by the mass social justice movements of the day.

This powerful demonstration of working-class solidarity wielded in support of striking food service workers is what WBUTP posits is the source and force that binds us—the exploited and oppressed masses—to our most powerful and transformative realizations of ourselves. WBUTP rightfully concludes that the strikes would not have been “so significant and so successful without the astounding shows of solidarity and coalitional power shared between workers, students and the broader community. Nor could this groundswell of strikes have existed without the connective tissue that bound them together into a greater movement for justice.”

All hope is not lost however! As WBUTP reminds us, worker power and solidarity may not yet be able to realize the strength and transformative potential that it summoned in 1969, but it is far from extinguished. As workers face new assaults under the COVID-19 pandemic and a corresponding global regime of disaster capitalism, we can gather courage, hope, and belief in our ability to fight for ourselves from essential workers organizing in Amazon warehouses all across the nation, or Black sanitation workers organizing wildcat strikes in Pittsburgh, or bus drivers striking in Birmingham, or nonunion workers walking off the production line at a Perdue Farms poultry plant in Perry, Georgia. If there is one clear message that WBUTP articulates, it is that fear and despotism do not have to be the yokes that bind us to this place. We can instead choose to unite across our various workplaces and differences to commit ourselves to a vision of collective liberation struggle until we defeat the bosses and assert control over the wealth and abundance that we produce.

• Demetrius Noble is an activist and teacher, currently serving as a professor in the African American & Diaspora Studies department at University of North Carolina Greensboro.