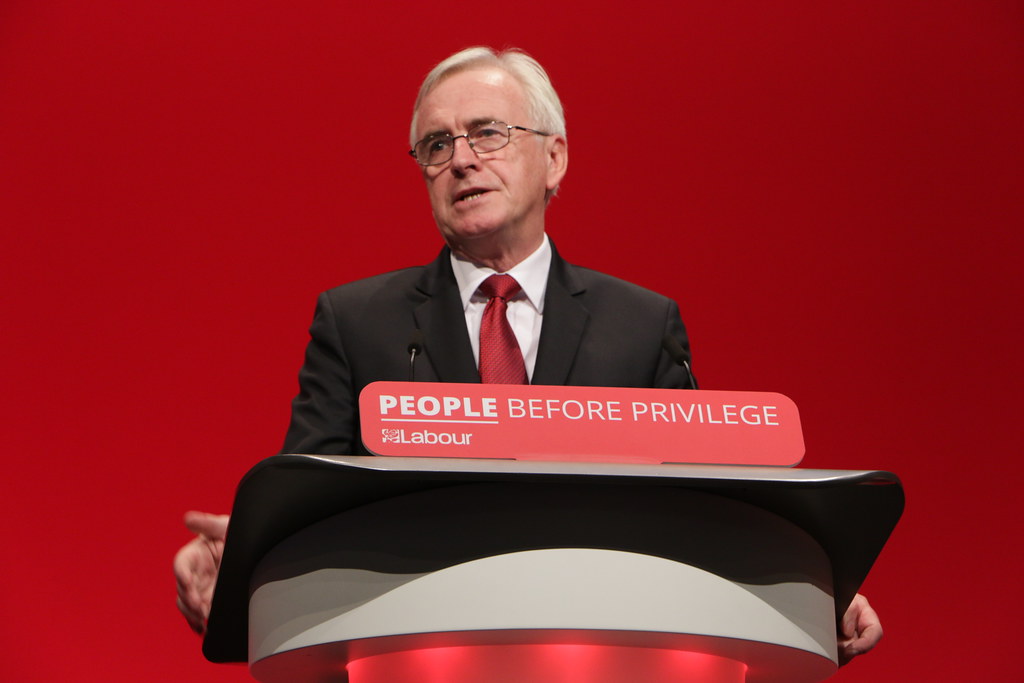 Last week, John McDonnell MP spoke to disabled activists in the rail and transport union RMT about the COVID-19 crisis and the government’s response to it. Janine Booth, Clarion contributor and chair of the RMT’s Disabled Members’ Advisory Committee, thanked John for his work as Shadow Chancellor and asked him about his thoughts on the current situation. This is what he said.

In terms of the Coronavirus outbreak and our negotiations with the government, the key issue that has come out of this is just how unprepared the government was for this epidemic. Matt Wrack of the FBU gave me a ring the week before last, and reminded me that under the government’s contingency planning, they did an exercise back in 2016 called Cygnus and it was based upon what they then thought was the number one risk, which was a flu pandemic. He said basically what came out of that – and what everyone now knows – is just how unprepared the government was, and that if you’ve got austerity measures for ten years, cutting back on public services, especially health and social care, you’re not going to be prepared for when a crisis like this occurs. And that’s exactly what’s happened.

If you remember, there were 50,000 nurse vacancies before the crisis, they’d cut 17,000 beds, and in social care, around 1 and a quarter million were not getting the social care they needed, but also over 125,000 vacancies in the social care sector. So we were ill prepared for any crisis like this. Then, over the last few weeks, they came up with this strategy, which was completely contrary to what was being employed elsewhere based on the WHO recommendations, that they’d allow the virus to go throughout society and we’d build up a herd immunity. What was pointed out to them was that you usually get herd immunity through vaccination, not by allowing people to suffer from the condition. That’s why there was such a lack of focus on testing. The WHO has said test, test, test and track, and the government only now is opening up to that. Boris Johnson promised us a couple of weeks ago 250,000 tests a day by now, and now Hancock has come out with this promise of 100,000 tests by the end of the month. We’re still not sure whether that’s swab testing or antibody testing; there’s no guaranteed test at the moment. It’s been an absolute mess.

What we’ve been trying to do is having some form of constructive engagement with them, so making sure that where the NHS needs money they get it – although it’s difficult to make up for 10 years of cuts. Making sure there’s staff support, and trying to make them to expand the testing now. What we’re saying is they need to give us a date, particularly when NHS staff get access to testing, but also social care workers as well. There’s a real crisis developing in residential care homes, as well as for social care workers who are peripatetic, who move from house to house. What we’re finding is there’s little testing going on, so we can’t track the condition. In addition, little PPE being provided – not just to NHS workers, but also to other key workers, like social carers. We have to be careful about the tone we approach this publicly, and we’ve been trying to work together on this, but I’ve got say huge mistakes have been made by the government, and they certainly haven’t learnt any lessons from elsewhere.

We’ve also been trying to say, and this was five weeks ago now, we put proposals for an international coordination on this, both in terms of the G20 coming together and also through the UN and the WHO, to make sure there’s investment going in. Because the big issue now is that it might well be in certain Western European countries that there’s a strategy being developed, as in China and South Korea, but actually places in Africa where the health services aren’t necessarily as well developed where this could be a real disaster. So we’re saying to the government there’s got to be an international leadership role on this, to make sure that developing countries in the Global South get the support.

Four and a half weeks ago I did a speech where I said there needs to be a proper assessment of all government departments, what resources they need, and that they should get those resources. But what we also said was that there should be support for individual workers who themselves are either going sick or self-isolating – and we made the point then that statutory sick pay of £94.25 is so low that no one can live off it, and Matt Hancock has accepted that – but we also said if there is a process for workers going off on furlough, companies should be paying 100% of wages not the 80% that Sunak has put forward, and we said the government should be putting 80% up and companies participating in that should be required to put the other 20% up. They introduced the scheme, they’ve not made it compulsory, and what we’re finding is large numbers of companies are not participating; some companies are forcing people into work, particularly construction sites that are really dangerous in terms of contagion, but in addition to that a number of companies are using the virus as an excuse to lay people off – not participating in the job retention scheme but sacking people. So what we’ve seen is 950,000 people over the last fortnight apply for universal credit, many of those because they’ve lost their job. We’ve said to the government there needs to be more monitoring, more enforcement about safety and conditions at work, and in addition to that really a requirement for companies to participate in the scheme to protect people and their jobs for the future.

We’ve also said to them, sick pay should be at the real living wage, they should increase benefit levels – JSA, ESA and carer’s allowance, at least to £100 but actually now we’re arguing a national earnings guarantee and the Joseph Rowntree Trust figure for that is about £221 a week. They’ve shifted a bit, and we’re going to keep the pressure on them. I’ve been doing telephone conferencing with treasury and cab office civil servants to try and push them along a bit more, but out there it’s looking pretty bleak for large numbers of people who are either being forces to work and risking their health, or are not going to work and as a result are not getting a decent income.

Finally, if there are any lessons to come out of this – once we get over this virus, we should be talking about the sort of society that we want, the sort of economy we want. The key aspect is we need decent public services, properly funded so they can properly respond to any challenge, and that means a fair taxation system. But its interesting isn’t it – when it comes to the provision of, for example railways, they’re completely dependent now on the state, publicly owned and publicly managed is the only way forward for those services. And I think that will open up the debate: why should we hand them back to the privateers once this crisis is over, because they’ve proven they are unable to sustain the level of service, not only during the crisis but also on a day to day basis in more normal times.

So I think there are lots of lessons to be learnt about the future of our society. And from our prospective, the progressive left, we should be arguing that case as well because the right-wing will want to pay for this crisis with another decade of austerity, and we saw some of them at the beginning of the week lobbying to prevent an increase to the minimum wage, so you can see their direction of travel. They’ll want working people to pay for this crisis rather than making sure we have a fair taxation system. I’ve done an article for the Guardian today arguing that this crisis should be paid for by a windfall tax on the multinationals, a wealth tax on the rich, so that actually they pay this time rather than what happened with the banking crisis when it was ordinary working people who had to pay for it with austerity being imposed for ten years.

I stand down tomorrow as Shadow Chancellor. I’ll be going on the backbenches, and that frees me up to get involved with a whole range of direct campaigning, back on picket lines or online picket lines where we name and shame employers for failing to support workers, as we’ve just done with McDonalds and Wetherspoons.