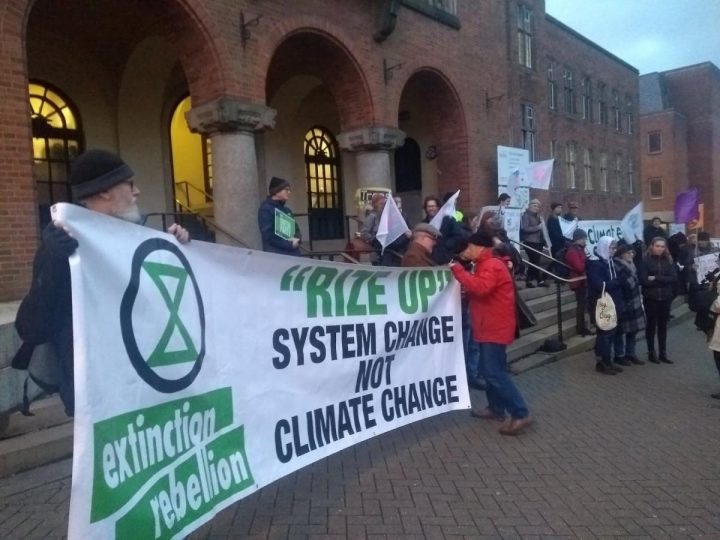 Members of groups including Extinction Rebellion (XR), Friends of the Earth and the local branch of Young Labour held a well-attended rally outside the council house before the motion was debated, and when it became clear that Tory Councillors were opposing the motion, climate activists erupted in protest in the public gallery.

One Tory Councillor argued that Dudley shouldn’t have climate targets because: “what about China?”

Now it has been announced that the Conservative cabinet will declare a climate emergency, but unlike the majority of the nearly 300 councils to have done so, it will not stick to the widely respected 2030 carbon neutral target. It won’t even commit to the Tory West Midlands Mayor’s regional target of 2041, instead scrapping the target entirely until a working group of Councillors has met to discuss the issue.

With recent Stourbridge Friends of the Earth research putting Dudley MBC 335th out of 340 local authorities in taking measures to offset the climate crisis, and with Tory Councillors demonstrating their complete lack of understanding of the issue at the last full council meeting, the Dudley climate debate rages on with Labour, XR, etc. not at all placated.

So, below, we publish a speech made by local XR activist Holly Davis outside the council house on 24 February. Campaigners are planning on gathering once again next month to pressure the council to go further than the cabinet’s current plans; please email Dudley Momentum for details later in the month.

First of all, I would like to thank everyone who has come today in support of Cllr Chris Barnett and of the motion for Dudley Council to declare a climate emergency, the first step for this community in acknowledging the huge problem we all face.

Our planet is undoubtedly in a state of climate emergency, and although it is not as evident here where we are just beginning to wake up to the effects of climate change, as it is in other areas of the world, it is still vital that we do our best to reduce our impact, as individuals, as families, as businesses, and as a community.

I think it’s easy for people to put their heads in the sand when it comes to the climate crisis, because so often we look at what others could be doing. It’s easy to point the finger elsewhere especially when we question our own effect, for I am just one person, and this is just one borough. But without local effort, we cannot sustain global effort. Without individual councils like Dudley making the necessary steps they must take, change will not happen. And it needs to happen now.

The very earth that gives us life, clean air to breathe, food to eat, clean water to drink and a space to call our home is being destroyed at an unprecedented rate due to our capitalist system and consumer societies. In the UK alone, research has shown that we are among the most nature depleted countries in the world, and since the 1970s species decline has increased significantly, with one in five British mammals at risk of extinction.

If we do not prevent the damage now we will face more biodiversity loss, increasing sea levels, more wildfires, more extreme weather, more water shortages and more crop failures. Yet still our government allows the destruction of delicate habitats, still they allow the exploitation of living creatures, still they allow the pollution of our air, our earth and our water. They continue to promote a profit over planet attitude, condemning the condition of our earth for economic growth. Continuing in this way is entirely unsustainable.

Extinction Rebellion Stourbridge, the group of crusty hemp smelling hippies I call friends, are here because we have exhausted all other methods of action: the petitions often go unheard, writing to MP’s often gets a generic, meaningless response, and protesting without disruption is no threat to the toxic systems we must challenge for a better earth.

In the words of Greta Thunberg, “for way too long, the politicians and the people in power have gotten away with not doing anything to fight the climate crisis, but we will make sure that they will not get away with it any longer”.

It is up to all of us as human beings to encourage action against the “business as usual” attitude towards the climate crisis, whether that be making better choices individually, encouraging the sharing of knowledge with others, or working towards systemic change. What we are doing here, now, is a step towards that.

For a copy of Stourbridge Friends of the Earth’s detailed Dudley Climate Action Plan, drawn up alongside Cllr Barnett’s motion, please email friendsoftheearthstourbridge@gmail.com.