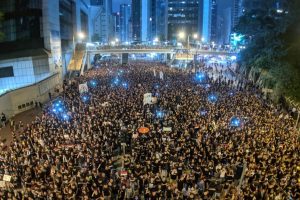 The Clarion is republishing this statement from UK Solidarity with Hong Kong. We urge you to sign this statement, which you can do here. For more on what UK labour movement activists have been doing on this issue, including at Labour Party conference, see here.

As UK socialists, labour movement, student and democracy activists, we express our solidarity with the continuing struggle for democracy in Hong Kong.

We support the Hong Kong people’s upsurge against the attacks on their democratic rights, against oppression and inequality.

We support the immediate five demands of the movement: for an end to repression, for serious measures to deal with the police state and for democracy including a government elected by universal suffrage.

We support independent workers’ and students’ organisations involved in the struggle. We demand the reinstatement of the Cathay Pacific airline workers sacked for supporting the democracy movement, including their union leader Rebecca Sy and city legislative council member Jeremy Tam.*

We call on the labour and trade union movement across the world to organise political and practical solidarity with the Hong Kong struggle for democracy. The battle to defend democratic liberties of all workers, particularly migrants in the US and UK, is inseparable from that of our sisters and brothers in Hong Kong now.

(All signatures are in personal capacity unless stated otherwise)