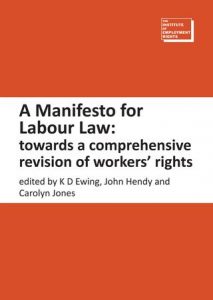 John McDonnell has said in several recent interviews that one of a Corbyn government’s priorities in its first hundred days will be to “restore” trade union rights. What rights are we talking about?

In so far as this question is discussed among Labour Party activists, references are often made to the manifestos published by the Institute of Employment Rights think tank – which is officially advising the leadership – in 2016 and this year. Queries about what people think Corbyn and McDonnell intend in this area are frequently met with reference to these documents. However, to be a bit brutal, not that many of those referring to them seem to have a clear idea what they say or what the leadership have said (and not said) in connection with them.

The Clarion has published extensively about what the Labour leadership and various Labour politicians have said about the anti-union laws and the right to strike. There is perhaps a need to summarise all that in one place, but this article will focus in particular on the policy of the IER and its relationship with Labour’s stance.

The IER is run by people with a long history of campaigning for repeal of the anti-union laws. It’s chair, John Hendy, was previously chair of the United Campaign to Repeal the Anti-Trade Union Laws. He wrote a classic pamphlet forcefully asserting the need to abolish all the anti-union laws and polemicising against the Blair government on the issue in 1998, jointly with Bob Crow (for part of the conclusion, which should be quoted over and over today, see here). However, it seems that over recent years these comrades have, for whatever reasons, decided to let us say increasingly de-emphasise this demand.

(There is still notionally a Campaign for Trade Union Freedom, a sort of successor to UCRATUL, of which Hendy is vice-chair. It shares many personnel and seems to exist in a sort of symbiotic relationship with the IER, in so far as they are not essentially the same thing. Almost all of what is said in this article applies to the CTUF as well, with the qualification that it has less real existence than the IER.)

The Institute’s 2016 Manifesto for Labour Law is a step back from the clear and assertive call to repeal all the anti-union laws contained, for very good instance, in Hendy and Crow’s 1998 pamphlet. However, it does contain extensive material on the need for a much stronger right to strike, explaining right at the start that “collective bargaining” – the reinstatement of which is its central focus – “without the right to strike is little more than collective begging”. It goes on to say that “The right… to strike is an essential element in the principle of collective bargaining”. And so on: the manifesto contains many more statements and quotations making the same crucial point, which I explain further below.

In its section on the right to strike, the 2016 manifesto at least implicitly accepts certain aspects of the anti-union laws but advocates really quite radical changes to them (on ballot procedures, notice periods, what strikes can be about, secondary action, picketing, anti-strike injunctions, reinstatement of strikers and various other aspects). If implemented in full, these changes would be unsatisfactory but nonetheless represent a major victory and potentially a major opening up of the possibilities for workers’ struggles.

1. Straight off, the “principal recommendations” at the end of the manifesto seem significantly less clear and radical than the document as a whole.

2. More worryingly, the numerous statements from the Labour leadership – particularly John McDonnell – welcoming the manifesto do not make any commitments or comments on the right to strike or on repealing or even modifying the bulk of the anti-union laws, but rather seem to deliberately avoid those topics. Meanwhile both the leadership and the IER itself have in this respect focused almost exclusively on “Repealing the Trade Union Act” of 2016, with no other commitments on the right to strike.

This means ignoring the clear policy passed at Labour conference in 2015, 2017 and this year – to repeal the TU Act and the earlier anti-union laws introduced between 1980 and 1993, and replace them with strong legal workers’ rights including strong rights to strike and picket.

3. Also worrying is the fact the IER’s second (2018) manifesto, which is billed as a blueprint for implementing the 2016 document, makes no reference to the right to strike or the anti-union laws at all – except for a quarter-sentence in the introduction saying that it will not cover that!

It seems to us that there is a problematic and concerning trend here.

To be clear, our point is not that the IER and the Corbyn leadership are not advocating anything good in terms of workers’ rights. It is that none of these things are substitutes for a strong right to strike and the repeal of the anti-union laws necessary for that. (This is not the place for an extended argument on this point, but in our view if the leadership does intend to tackle the anti-union laws, it needs to publicly advocate and argue for this now, not hope the issue will become easier to argue later on!)

In fact without a strong right to strike many of the policies the leadership is advocating very likely cannot be realised, at least not in a way that will benefit workers and produce a genuine labour movement revival.

That is particularly true for the demand which the IER and the Labour leadership are making central: reinstating collective bargaining between employers and unions over wages, terms, conditions and standards. The reasons collective bargaining needs to be combined with a strong right to strike were explained well by the IER in 2016 (eg see the quotations above), but increasingly less so.

The Clarion would argue: as long as capitalism exists, collective bargaining is generally preferable to the absence of it. The decline of coverage from 85-odd percent of workers to more like 20 percent is a shocking measure of the labour movement’s retreat. But ‘collective bargaining’ can take various forms and mean various different things in practice. Without the ability to take industrial action freely, it means locking workers into a framework which stifles rather than empowers them.

References to the IER are often accompanied by assurances that shadow ministers are working with it to develop policy on these issues. But both from the standpoint of Labour Party democracy and in order to ensure the policy includes a strong right to strike, this process must include the demands passed by Labour Party conference in recent years – and the most radical demands in the 2016 IER manifesto – not ignore them.