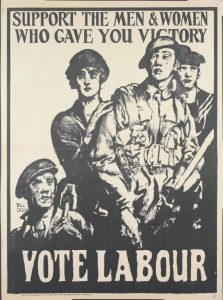 The 1918 general election was the first to be held on a single day (14 December), the first in which nearly all adult men were entitled to vote, and the first in which women voted. It was called at just one month’s notice by the Tory-Liberal-led wartime coalition government in order to cash in on the war victory and to minimise the effect of working-class enfranchisement in winning seats for a resurgent Labour Party. The government’s gambit worked, but nevertheless the election was a turning point for Labour.

Seismic changes to the voting franchise – although not the full, unqualified adult suffrage that many socialists wanted – came into force with the Representation of the People Act on 6th February 1918. The Act gave the vote to virtually all men aged twenty-one and over, the least propertied forty per cent of whom had previously been excluded. It also gave the vote to those women aged at least thirty who occupied land or premises of a yearly value of five pounds or a dwelling house, or who were married to a man registered as a local government elector, or who were graduates voting in a university constituency. In 1912, Britain had 7.7 million voters, all male; at the end of 1918, it had 21.4 million male and female voters.

The Act was the outcome of the ‘Speaker’s Conference’ set up in October 1916 by a coalition government which was under pressure to grant votes to the fighting men and fearful of a return to suffragette militancy after the war. When the Conference reported, it accepted the right of women to vote, but with age and property qualifications.

Why were only some women allowed to vote? The usual reason given is that because of the deaths of so many men in the war, enfranchising women on the same terms as men would mean that women voters would outnumber men. However, historian Julia Bush believes that there was also a more directly political reason: that the government hoped that the inclusion only of older, propertied women ‘would provide conservative ballast within the new mass electorate, reinforcing the stability of a society threatened by war and the spectre of Bolshevism.’

Revolutionary Russia had granted the vote to all women and men in summer 1917.

Russia’s revolution in February of that year ousted the Tsar and attracted wide support from the British labour movement, although attempts to replicate Russia’s workers’ councils in Britain foundered. Socialists and labour activists took inspiration from the revolution, and after the Bolsheviks led the working class to power in Russia in October 1917, some socialists embraced the prospect of more comprehensive forms of democracy than Parliament.

Britain did not yet have a Communist Party, and other than a single-figure number of other left candidates, socialists got behind Labour’s electoral effort. While revolutionary suffragette Sylvia Pankhurst refused an offer to stand as a Labour candidate and boycotted the general election, most supporters of the revolution felt that they could take the opportunities presented by Parliamentary elections while still fighting to transform society. This was especially true when the working class had finally got the vote, and when the Labour Party itself was undergoing transformation.

The Labour Party had been founded in 1906 to promote the election of workers’ representatives to Parliament, after enough socialists and trade unionists had concluded that relying on favours from the Liberal Party was never going to achieve real improvements for working-class people. The Party formed as a coalition of trade unions and socialist societies (primarily the Fabian Society to the right and the Independent Labour Party to the left), with no individual members and little local activity. Although it had been a step forward in the political development of the working class as an independent actor in its struggle against exploitation, the new Party was focused not on radical social change but on winning seats in Parliament, and those who won those seats quickly disappointed the labour movement. Labour MPs mostly failed to support the suffragettes, backed the First World War which started in 1914, joined the wartime government and did not fight effectively for working-class interests.

By 1918, matured by the experience of the war and the widening of the voting franchise, and in the wake of revolution in Russia, the Labour Party changed itself. In February 1918 – the same month in which Parliament passed the Representation of the People Act – the Labour Party adopted a new constitution. It allowed individuals to become members, enhanced the role of local party branches, and bound its candidates more closely to the Party’s political programme.

The new constitution also introduced Clause IV part 4, which set out the party’s aim ‘To secure for the workers by hand or by brain the full fruits of their industry and the most equitable distribution thereof that may be possible upon the basis of the common ownership of the means of production, distribution and exchange, and the best obtainable system of popular administration and control of each industry or service.’ This clause grounded the Party in a commitment to dispossessing the capitalist class and placing society’s productive wealth in the hands of the producers. However, it aspired to do this for the workers rather than with the workers. It was written by Sidney Webb, whose Fabian Society aimed to achieve social change ‘from above’, by influencing existing institutions rather than replacing them, and which had a rather sniffy attitude to working-class people. As Ralph Miliband later argued in his book ‘Parliamentary Socialism’, Labour ‘had finally done with its own brand of Liberalism’ but had replaced it not with socialism but with ‘Labourism’.

The reconstitution of the Labour Party inspired activists to set about building the newly-empowered local parties with newly-admitted individual members. Their efforts gained a new impetus in July 1918 when the Party declared the end of the wartime agreement not to contest elections. It knew that the war would end soon and finally accepted that military war had not suspended class war. The employers had continued – in some ways, stepped up – their exploitation and oppression of workers, and Labour had a duty to defend and represent the working class. 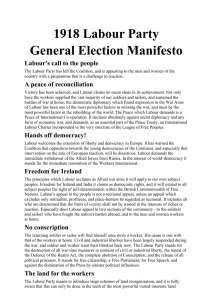 After four years of bereavement and loss, of separation and distress, of fear of bombs from the air and telegrams from the front, the war finally ended on 11th November 1918.

Just three days after the Armistice, on 14th November, the government announced that there would be a general election exactly one month later. It appeared to be a manoeuvre to hastily cash in on the upbeat mood of victory and peace before concerns about poverty, inequality and social conditions could come back to the fore, and it would take place before many servicemen could return home from the war.

A Labour leaflet asked rhetorically. ‘WHY a General Election when many soldiers cannot vote? The government is trying to snatch a vote of confidence before the fighting men have a chance to examine reconstruction plans and say what they want’. Nevertheless, Labour swung into electoral action, promising the soldiers and sailors a speedy discharge, a generous gratuity, no exploitation of pensioners, immediate employment, trade union wages, and full provision for disabled men, women and orphans. Labour pledged to ‘GET JUSTICE for the soldiers and sailors.’

Labour having left the coalition government, the remaining coalition partners – the Conservatives and the faction of the Liberals led by David Lloyd George – had spent the summer of 1918 in secret talks to continue their coalition into peacetime. They endorsed over three hundred Tories, more than one hundred Liberals, and five pro-war renegade Labour MPs as their preferred candidates, giving each of them a ‘coupon’ to identify them as such. Because of this, the 1918 general election would become known as ‘the coupon election’.

The Labour Party’s manifesto promised steep progressive taxation and the ‘conscription of wealth’, arguing that ‘those who have made fortunes from the war must pay for the war’. It offered a radical improvement of life at work, including ‘the fullest recognition and utmost extension of trade unionism’, a national minimum wage, legal limitation of working hours, drastic strengthening of laws governing workplace safety and compensation and the universal right to work or maintenance (welfare benefits). It pledged to nationalise and bring under democratic control vital public services including mines, railways, shipping, armaments and electricity.

The Labour manifesto also promised to nationalise the land, a million new houses let at fair rents, and a new Public Health Act. Labour boasted of being the ‘real women’s party’ and pledged equal pay for men and women.

Labour’s manifesto was internationalist. It included British withdrawal from military action against Russia and self-determination for India, Ireland and other countries under British rule. It opposed import tariffs and supported free trade, as ‘the way to deal with unfair competition of imports made under sweated conditions is not by tariffs, but by international labour legislation, which will make sweating impossible’

Although it was titled ‘Labour and the New Social Order’, the manifesto’s policies outlined less a new social order and more the best version of the old one. It pledged explicitly to achieve change only by ‘constitutional’ means. Nevertheless, it was a bold and important step forward for Labour which, if implemented, would have significantly benefited working-class people.

The coalition’s tactics gave it the result it wanted: a landslide victory bringing to power a Conservative-dominated government with a Liberal Prime Minister, David Lloyd George. Labour came second, with over two million votes. Although this was a huge increase in both the number and proportion of votes it received, its twenty per cent of the vote translated into only eight per cent of the seats. Its fifty-seven MPs were the largest Labour contingent so far, but were a small minority and were mostly socially-conservative trade union bureaucrats.

Only seventeen women stood as candidates, and the only one elected – the socialist and Irish republican Constance Markiewicz – did not take her seat. She was one of seventy-three successful Sinn Fein candidates in an election which saw Irish voters rally behind the call for the country’s independence, all of whom refused to sit in the British Parliament because they did not recognise its legitimacy.

The labour movement at the time supported proportional representation, and the election result drove home how limited Parliamentary democracy really was. Labour-supporting newspaper the Daily Herald referred to the resulting House of Commons as ‘bogus’.

Despite its electoral defeat, Labour was getting stronger. But while its rank and file went into 1919 on a class-war footing on both the political and industrial fronts, its leaders tried to contain their enthusiasm and limit their achievements. They were determined to stay within the constitution, however unjust and class-divided the existing system remained. This conflict would escalate dramatically in 1919, but that is a story to be told next year.