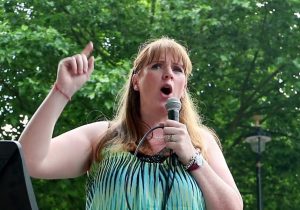 In September 2014, deputy Labour Party leader Angela Rayner (then a Unison official, not yet an MP) spoke at a Manchester Trades Council public meeting about the need to repeal the anti-trade union laws introduced by the Tories in the 1980s and 90s. She wrote a summary of her speech for Unison North West, expressing the case briefly but forcefully. Excerpts below.

For the full video of the speech, which is significantly longer and explains all the 1980-93 anti-union laws blow by blow, see here. In it, she says: “New Labour tried to present their limited reforms as a final settlement. We have to categorically reject that. Our goal is to repeal the anti-union laws of the 1980s.”

This is the argument we need to hear, but are not yet hearing, from the Labour Party of which Rayner is a leader today. That was true under Jeremy Corbyn and remains true under Keir Starmer, perhaps more so.

On Saturday I had the pleasure of addressing a meeting organised by the Manchester Trades Council about the need to repeal anti-trade union legislation.

Our movement continues to be held back and hamstrung by legislation passed by the Conservative Government during the 1980s. There were [multiple] Acts passed while Thatcher was Prime Minister, and each altered the rules against the interests of working people. Some attacks were aimed at individual employment rights, some aimed at the ability of unions to function as organisations and some aimed at creating greater obstacles to effective industrial action.

We should be in no doubt that the changes made then were part of a concerted ideological attack. Thatcher even drew a parallel between how she approached fighting a war and how she approached organised labour – saying that the ‘enemy within’ is more dangerous. We should never forget how much Thatcher, and now her heirs in the present Government, fear us and how much they want to get rid of us.

The New Labour years brought some respite, but not the reversal of the anti-union laws that we needed. Blair could still boast of the how the UK labour market was amongst the most deregulated in the western world.

Since 2010, the attack has resumed again in earnest. We’ve seen the introduction of Employment Tribunal fees – causing a 79% fall in the number of cases being heard. We’ve seen the requirements on employers to collectively consult workers in a redundancy situation relaxed and the TUPE provisions weakened. We’ve seen the provisions of the Gagging Act come into effect last Friday, putting limits on the activities of unions and other civil society organisations in the run up to the general election in May.

The worst reforms may be yet to come [as indeed they were, with the 2016 Trade Union Act, after the Tories won the 2015 election.]

What we have seen is a sustained attempt – now lasting decades – to make it harder for unions to function effectively. It is a responsibility of the unions affiliated to the Labour Party to highlight how the anti-union laws hamstring our activities and our ability to defend and improve the condition of working people.