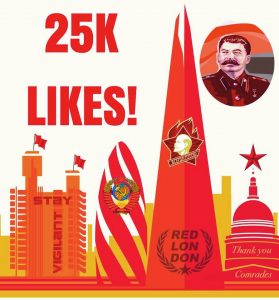 Please add your name using the form at the bottom of the statement. For our statement on Red London’s recent attack on us and one of our editors, see here.

We the undersigned, coming from a variety of political viewpoints on the left, strongly oppose the politics of the ‘Red London’ Facebook page and the wider culture of lying and harassment it has promoted and contributed to, poisoning the environment of the left.

Under the guise of “banter”, Red London bullies and harasses, targeting their opponents on the left – particularly Trotskyists, anarchists, feminists. They use out-and-out slander, for example making accusations of support for child abuse. They denigrate “identity politics” while promoting a toxic version of white male identity politics under the false label of class politics, serving to excuse nasty and abusive attitudes. They produce memes and use language conveying racist, sexist, homophobic and transphobic messages. They are or pose as English nationalists. They consistently and crudely glorify Stalin, Kim Jong-un, Enver Hoxha, Bashar al-Assad and similar.

Such politics and methods pollute the left and weaken the fight to transform society – as does any collaboration with them. Any serious leftist who in any way has links or cooperates with Red London will break that off and speak out against them and what they represent.

We need a democratic left and labour movement in which differences, even sharp ones, are debated honestly and in a comradely way, not responded to with slander and abuse.

To add your name please sign this form or
email your name and how you want to be listed to theclarionmag@gmail.com
(for a full and regularly updated list of signatories see above – please note
that names are not added immediately).

All signatures are considered as in a personal capacity unless you tell us otherwise.

Red London people have spammed the form with various unpleasant abuse, so apologies if
your name appears when you didn’t sign (just email to let us know – please also email if you recognise a name that you think isn’t real) or if you actually signed but your name hasn’t appeared (ditto).