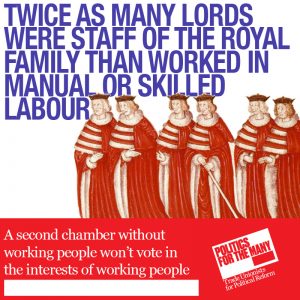 Labour conference saw a concerted focus on the party’s internal democracy. And with good reason: members know that if undemocratic structures aren’t changed, the Corbyn project will be built on sand.

If that’s true of the party, it’s even more true of the country. Corbyn recognised this, moving the debate on from Labour’s internal battles in his speech:

“Inequality is not just a matter of incomes. It’s about having a real say too…We are not only determined to rebuild our economy, communities and public services, but also to democratise them, and change the way our economic system is run in the interests of the majority.”

The challenge now is to build on that vision. Because democracy is in a pretty dire state of health today – IpsosMori polling showed that a lack of faith in politics, politicians and government has made its debut in the top 10 issues for Britain.

And in September, a survey for the Electoral Reform Society by BMG Research showed 75% of Labour supporters believe ‘democracy in Britain is in urgent need of reform’ – alongside two thirds of the general public.

This view crosses many dividing lines: 71% of Leave voters and 66% of Remain voters agreed too. Whichever side of the debate you were on, it was fairly clear that the idea of ‘taking back control’ won the EU referendum in 2016. It was the first time many people felt their voice would be heard. Taking power back from Brussels hasn’t brought it any nearer the people though: the same feeling of distance from power is now fuelling the far right.

In 1952, Nye Bevan wrote that there is “one practical question: where does power lie…how can it be attained by the workers?” (‘In Place of Fear’).

Today it’s clear that power in the UK is still not held by working people. From an unelected House of Lords packed with party donors, to millions of people’s voices being silenced at the ballot box by a rigged electoral system, control is concentrated in the hands of an elite.

We see ‘Henry VIII’ powers being used, unchecked, to push through controversial plans. Devolved governments being overruled. And the Committee system changed to guarantee the government an undeserved majority. All the while, parties continue to pack the second chamber with unelected party hacks and donors while slashing the number of elected MPs.

None of this is a coincidence: the UK’s political system was built on the ruins of feudalism, empire, and aristocracy. Despite devolution, the UK remains one of the most centralised and undemocratic countries in the developed world. Where people have won change, it has been through struggling to change the rules of the game before they could change society itself.

Indeed, the journalist Neal Ascherson wrote in 1985 that it is ‘easier to induce a vulture to give milk’ than to get socialism from within the ‘ancient institutions’ of the British state.

That’s why, from the Chartists pushing for universal suffrage, to the Scottish TUC’s role campaigning for a Scottish Parliament, trade unions have often been at the forefront of demands for a democracy that puts working people at the centre. They exist to challenge concentrations of power and wealth.

With this in mind, a group of trade unionists set up Politics for the Many – the trade union campaign for political reform – in April this year.

Our launch report made the case for change: that only with political equality can we secure lasting economic equality – otherwise the scales will remain being tipped against workers.

There’s growing support for change in the union movement. The Scottish TUC dropped its historic opposition to electoral reform earlier this year – with Congress deciding the ‘burden of proof now rests with those who defend the status quo’. And the Politics for the Many campaign is backed by figures including Wales TUC President Shavanah Taj, former Jeremy Corbyn adviser Nancy Platts, and Unite Assistant General Secretary Howard Beckett. But we need the hundreds of trade unionists backing the campaign to become a mass movement.

This year the UK celebrates the centenary the Representation of the People Act, which extended the right to vote to working men and some women. And in 2019, we’ll commemorate the Peterloo massacre that saw working people lose their lives fighting for the democratic rights we hold on to today.

Today there’s a new frontier for our movement, which Corbyn began exploring at conference: we have to overhaul Westminster’s creaking establishment – and make it work for workers.

If you agree, join us: politicsforthemany.co.uk

How you can help: