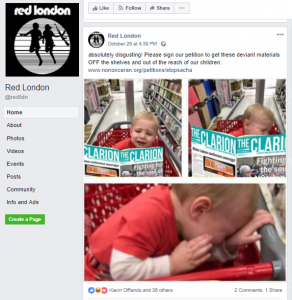 On 26 October, the ‘Red London’ Facebook page posted a meme attacking The Clarion and one of our editors, Sacha Ismail, more than implying that we and Sacha in particular support child abuse. It calls us ‘nonces’ and The Clarion ‘deviant materials’, urging people to sign a (non-existent) petition to ‘stop Sacha’.

Hard as it may be for those unfamiliar with Red London to believe, it has a long history of this kind of shameful abuse and horrible and totally untruthful attacks on individuals.

Red London has targeted Sacha in this way several times before. Its previous attacks have involved racist imagery, including a brown adult’s hand holding a white child’s (see below). And this kind of repeated targeting of a man of Asian/Muslim, specifically partly Pakistani, heritage is itself telling, in the context of current racist mobilisations under the pretext of the real issue of child sex abuse gangs. The targeting of Sacha is even more disgusting given that, as the Red London people know, he has a young child.

As it does frequently, Red London uses the word ‘nonce’. It regularly uses this term about not just child abusers, but others it is simply trying to intimidate. This kind of language should be unacceptable on the left and in the workers’ movement. The term also has a clear homophobic history and overtones.

The Clarion’s coverage of issues connected to child sexual abuse has only ever been implacably opposed to it. This is irrelevant to Red London, who are – once again – happy to trivialise this serious issue and damage serious attempts to tackle it as part of their drive to witch-hunt left-wing opponents. This is also, typically, grossly insensitive to those who have suffered abuse, trivialising it for a ‘funny’ meme to score (a)political points.

As the facts described above illustrate, though Red London claims to be left-wing it often acts more like part of the far right. It exists to promote, sometimes in ‘jokey’ form, extreme Stalinist-nationalist politics (this same week, for instance, praise for the USSR’s “democracy” under Stalin’s purges). It often engages in racism, sexism and homophobia, and personal bullying, all from behind a curtain of anonymity. It has targeted many anti-Stalinist, internationalist and critical-minded left-wingers – socialist organisations including AWL and Plan C, various organisations of oppressed groups, and numerous individuals, including comrades as young as fifteen.

Moreover, the kind of stuff this foul group promotes and popularises has a wider impact, poisoning the political environment of the left – particularly as it has the tacit and not so tacit support of some relatively prominent Labour leftists. The longer it goes without being strongly challenged the worse it will get.

To start with, this latest vile abuse must not be tolerated. We call for the attack to be taken down, and will take further action. We call on the whole left to condemn such shameful behaviour. 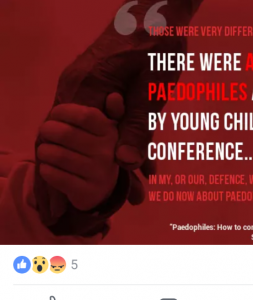