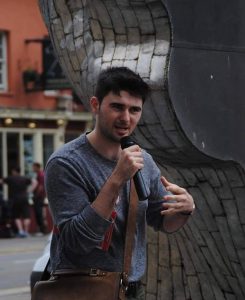 At a recent meeting of Hertfordshire County Council, 60 councillors voted in favour of appointing a new chief executive, Owen Mapley, and only one against – Labour councillor from Stevenage, Josh Lovell (pictured above). Josh’s name will be familiar to many of our readers as a contributor to The Clarion. Most recently he proposed the strong pro-migrants’ rights, pro-free movement motion to Labour conference which we reported on here. Josh was the only Labour councillor to vote against Mapley’s appointment; one abstained and the other seven voted for.

‘At the meeting 60 councillors voted in favour of the appointment. One voted against and one abstained.

‘Labour county councillor Joshua Bennett-Lovell, who represents the Old Stevenage division, said his objection was not to Mr Mapley’s appointment, but to the size of the £180,000 salary – which is more than the salary of the Prime Minister.

‘Is the chief executive really doing a job that’s six times more dangerous or challenging than a firefighter?” he asked. “Is it 10 times more gruelling than a care worker?”

‘“All of these roles share three major things in common – in Hertfordshire many of them are employed by Herts County Council, most of them haven’t seen real-terms pay rises for around a decade, and they all earn wages that are fractions of our chief executive’s – despite working in such challenging, stressful, and life-threatening situations.

‘“I want to make it clear this in no way reflects my feelings of this person (Mr Mapley), but my anger with a system that has fixed the lowest wages, while it unshackles the highest.”’

Josh explains further why he voted the way he did:

‘I can’t say this was a pleasant experience, but it was a necessary one.

‘There were several reasons that I voted against this appointment – all due to pay:
1. virtually all public sector workers have seen real-terms pay cuts over the past decade,
2. HCC has been cutting back spending on vital services for our communities – and is still planning more,
3. the role of Chief Executive – as demanding as it may be – should not be six-times more highly paid than a firefighter, nor ten-times more highly paid than a care-worker,
4. I cannot see any justification for a wage this high – £180,000 – 6 times the UK median salary, and even in excess of the Prime Minister.

‘Whilst I was then ridiculed by the opposite benches for standing by my principles within the Council Chamber, I have been warmed by comments received from those who were not present, but themselves deeply affected by this government’s punishing austerity program, many themselves council workers. I will always speak out against inequality.’

We at The Clarion would like to congratulate Josh on this stand and recommend this as an example of how socialists should behave, on small as well as big issues. 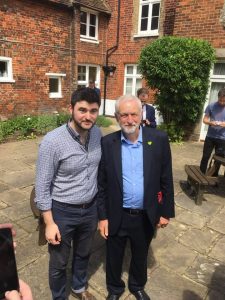