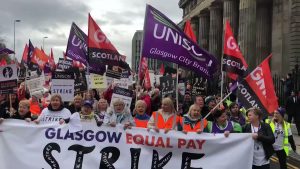 By The Clarion editors

At this stage, The Clarion can’t report anything much about the Glasgow “women’s strike” by thousands of home care, cleaning and catering workers that you won’t get from the GMB and from the bourgeois press.

We do however want to note the strike and express our solidarity. We hope to find opportunities for practical support and solidarity actions, and to help rouse the wider labour movement in support of the Glasgow workers’ struggle.

There is potentially quite a lot politically to say about this dispute, including the question of how to revive trade unionism, the character of the SNP, the role of Labour councils, and the relationship between class struggle and women’s liberation. For now, in addition to the impressive and inspiring fact of the strike itself, we would also like to highlight the additional fact that many hundreds of male workers in Glasgow – refuse workers, street cleaners, road workers – have taken unofficial action in support by refusing to cross picket lines and go to work. The council apparently threatened to discipline these workers, but has backed down, for now. So the strike also raises questions of solidarity action and of fighting the anti-union laws.

Both Scottish Labour leader Richard Leonard and Jeremy Corbyn have backed the strike, with Corbyn saying:

I send my solidarity to women council workers in Glasgow who go on strike today to demand equal pay.
They are the carers, cleaners and caterers who are society’s unsung heroes.
When they go on strike, it’s our duty to support them.

The last word in the struggle will go to the workers, but for now let us quote our former editor and GMB Scotland Organiser Rhea Wolfson who said, rightly:

The voice of Glasgow’s working women will be heard around the world. After decades of rampant sex discrimination they will tell their employer, ‘Stop the delays. We want justice.’