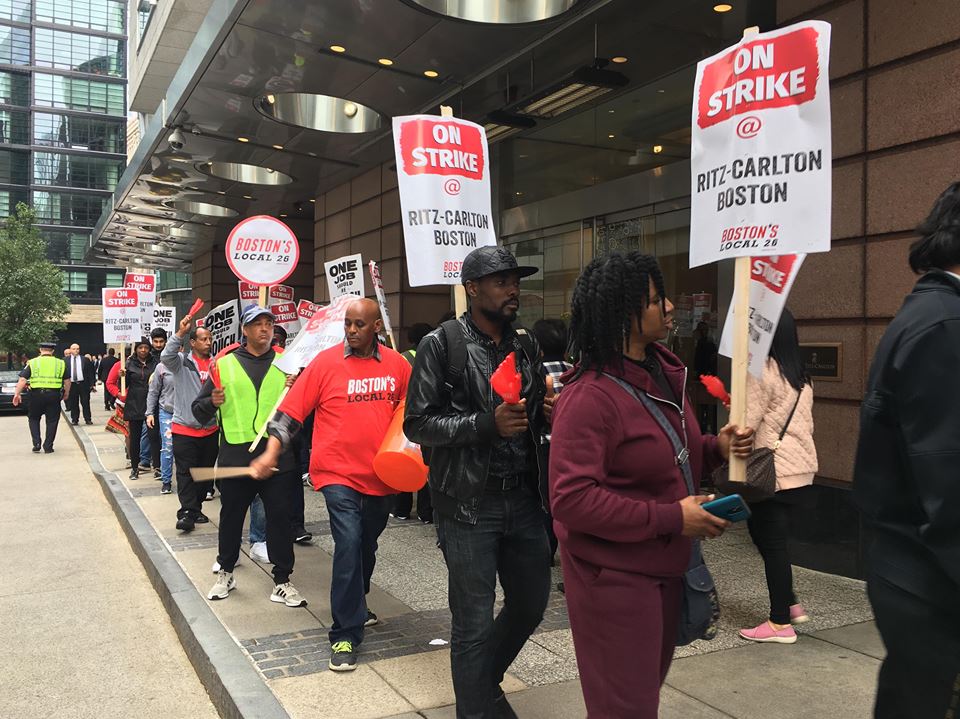 In the US, the Marriott Hotel workers’ strike is entering its third week. Organised by UNITE HERE, the strike began on 3 October. Starting in Boston, the strike has spread to multiple American cities and regions, including Detroit, San Francisco, and Hawaii, meaning it now spans seven time zones. In Boston alone, over 1500 workers are striking, with UNITE HERE Local 26 picketing seven different hotels. These numbers are especially impressive considering this is the first time Boston hotel workers have ever gone on strike.

Under the slogan ‘One job should be enough!’, the strikers are demanding a living wage, more stable working hours, new sexual harassment protocols, and protection from automation-related job losses. The strike’s core message is therefore much the same as that of fast food workers in the nationwide ‘Fight for $15’ campaign, with workers fighting against low pay and precarious employment practices in cities that have become increasingly costly to live in.

The pickets in Boston have proved a lively affair, with drums, marching, and chants keeping striking staff in high spirits. To the amusement of many, the strike entered the national spotlight on 4 October when members of the New York Yankees baseball team – bitter rivals of the local Boston Red Sox – crossed a UNITE HERE picket line at the Ritz-Carlton Hotel in Downtown Boston.

The team’s picket-crossing prompted outcry from many corners, with sharp rebukes from such US labour movement figures as Bring Lang, President of UNITE HERE Local 26, and Mario Cilento, President of New York State’s section of the American Federation of Labor and Congress of Industrial Organizations (AFL-CIO). Most entertainingly of all, hundreds of picketers in Boston took up signs emblazoned with ‘Yankees=Scabs’. The popular rap artist Common was similarly admonished for crossing the same picket line on 16 October.

On 17 October, Boston City Council unanimously passed a resolution to support the strike. This resolution includes commitments to discourage all city employees from sleeping, eating or meeting inside Marriott-operated hotels for the duration of the dispute. The council likewise recommends that city employees join the ongoing, daily picket lines in the city.

A company worth over 50 billion USD like Marriott International is more than capable of providing its staff with employment security, workplace safety, and a wage on which they can live. In this denial of secure employment conditions by an employer easily positioned to provide them, the Marriott strike strongly echoes the recent, highly visible industrial action in the UK by workers in McDonald’s, Wetherspoons, TGI Fridays, UberEats, and Deliveroo, as well as the ongoing Living Wage campaign by Picturehouse cinema workers.

I therefore urge British socialists and trade unionists to stand in solidarity with the Marriott Hotel workers. Only by recognising our common struggle can we defeat the gig economy across the globe.