An open letter to the “Europe for the Many” conference from a Greek socialist living in the UK, Labour, anti-Brexit and Another Europe is Possible activist Theodora Polenta

I am looking forward to attending the event “Europe for the Many: a left strategy for transforming Europe” on 26-27 October. But I am concerned about the fact that the conference’s top-billed speakers are the Portuguese prime minister and the Greek finance minister.

Are the current 2018 Syriza-ANEL government and its financial minister part of our European socialist vision? Can they be our inspiration or our partners in pushing a radical Labour government forwards?

No. The Syriza-led government is not part of Another Europe. It is part of the old Europe of austerity, memoranda, detention centres. At best a neoliberalism with a more human face.

Many of us actively worked for Syriza to form Greece’s first-ever government of the left. We wanted it to offer political representation to the anti-austerity movement, to cancel all the Memoranda imposing cuts, to bring in laws for a more egalitarian socialist society.

Yet Syriza’s route to power was at the same time a route to conciliatory collaborative politics – from the Social Forum of 2004, to its radical conference of 2012, to the more timid Thessaloniki declaration of 2015, to the “behind closed doors” efforts to outsmart the creditors, the February 2015 extension of the Memorandum, and then the total capitulation in July 2015.

The movement had too vague an idea of what it expected of the Syriza government; and there had been a distinct change in Syriza, in terms of who made decisions, between 2012 and 2015.

In 2012, Syriza was talking about a European social movement, about working-class control, about nationalising the banks. By the time Syriza moved into government in 2015 that had been reduced to the idea that, with Yanis Varoufakis, Syriza was going to outsmart the creditors.

Initially an anaemic attempt was made to create a pro-government social movement, with rallies and demonstrations for implementation of the Thessaloniki Declaration. But soon Syriza abandoned any attempt to relate, even in a top-down way, to friendly forces in other countries in Europe.

Syriza started adopting the language that the Labour Party often adopts at the council level: we need to implement the Memorandum, but in a less aggressive way than a Tory administration would. And, in parallel to some Labour right-wingers in local government, today Syriza cabinet ministers are claiming that if the Memorandum didn’t exist, they would have invented it.

Syriza governs in a coalition with the nationalistic (and xenophobic, racist, antisemitic, conspiracy-driven) Independent Greeks. The government has set up EU-backed concentration camps with horrific conditions for refugees fleeing wars in the Middle East and Africa.

By May 2017, Syriza had overseen camps detaining 62,000 refugees. The Moria camp on Lesbos alone detains 7,500 immigrants who are caged in by fences covered in barbed wire. Looking over the camp in watchtowers are armed guards.

On Lesbos island, more than 8,000 people are crammed into the Moria camp, which was supposed to house 2,000.

After three and a half years of Syriza’s rule, salaries have fallen by an average of 15 percent. One in five is unemployed, with employment still over 40 percent for young people.

Many families in Greece rely on pensions that have been slashed 14 times in eight years, with an average decrease of 50 percent.

The government has limited the right to strike – a right inscribed in Greece’s 1975 constitution as a guard against the type of untrammelled dictatorship of big business that Greece knew under the 1967-1974 CIA-backed junta of the colonels.

This summer, after the supposed end of the Memoranda, Syriza agreed another comprehensive austerity package. It included a €700 million tax cuts package for businesses. The tax rate on profits will be reduced from 29 percent to 26 percent. The reduction in the highest income tax bracket for individual taxpayers will result in a €877 million tax break for 2020, and €997 million in tax breaks for 2021 and 2022.

According to the EU statistics agency Eurostat, 22.2 per cent of Greece’s population is “severely materially deprived”. Household incomes have declined by over 30 percent. Today, the average Greek worker receives 23 percent less in wages than they did eight years ago. One in three of those with a job is in part-time employment. Greece’s minimum wage has been reduced from €751 to €586, and by 32 percent to €511 for workers below the age of 25.

The public health budget has been reduced by 50 percent, public education spending cut by nearly 36%, and welfare spending by 70 percent.

Around 500,000 young people have fled the country. 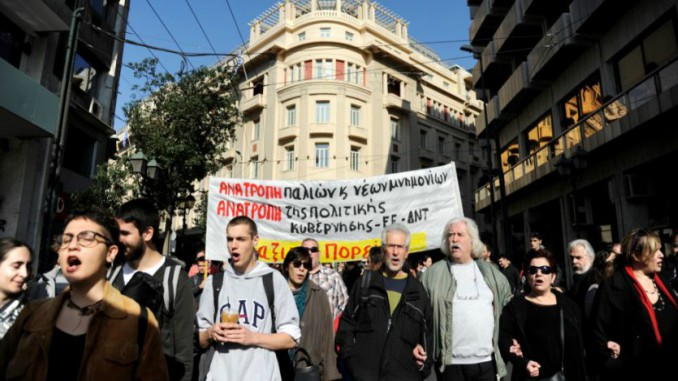 (Despite Syriza’s betrayal and resulting demoralisation, Greece’s workers have continued to struggle)

Not a single cent of the €289 billion spent in bank bailouts has gone towards reducing Greece’s debt. Nearly a decade later, Greece’s debt has increased to almost €350 billion – over 180 percent of Greece’s GDP. The loans have gone to pay off Greece’s creditors, particularly banks in Germany, France, Italy and Spain.

The plan agreed by Syriza requires Greece to devote at least 3.5 percent of economic output to debt servicing until 2022, and 2.2 percent until 2060 – diverting billions of euros from rebuilding Greece’s shattered economy into the pockets of the European financial aristocracy

But Syriza in government has not once attempted to rely on the trade unions and the social movement to build a movement for change across Europe.

A Syriza government which attempted, in confrontation with the creditors to carry through its program, should and could have had the critical support of the left across Europe. But it did not attempt that.

Syriza should have used its electoral and referendum mandates in 2015 to defy the EU leaders. It should have nationalised the banks, the ports, and other areas of industry, taken action against the state apparatus and called on the working class of Spain, Portugal, Italy and other EU countries to rally to its side.

It could have undermined the EU institutions and sparked off a continental movement to change the ruling structures of Europe. The crucial issue was not whether Greece broke from the EU, but whether it broke from capitalism.

If the EU leaders had moved to expel Greece from the EU, that would have only served to reinforce the class nature of the crisis. That would be entirely different from a Grexit in the hope that a return to the drachma outside the EU would benefit the Greek people, while leaving capital’s rule intact.

In Greek mythology, the Argonauts had to put all their power on the paddle in order to pass the Cyanean Rocks. Something similar is now required by the left-wing forces, the uninhibited militants, and the workers in order to move from frustration and pessimism and to go out into the open sea of struggles and battle to overthrow capitalism.

We cannot learn that from the Syriza government. The most important lesson for us from the Syriza experience is full democratisation of the party; the need to fight against any leadership clique that becomes unaccountable and detaches itself from the democratic decision-making of the party; the need to prepare for the ferocity of the class struggle which will be unleashed by both national and international forces.