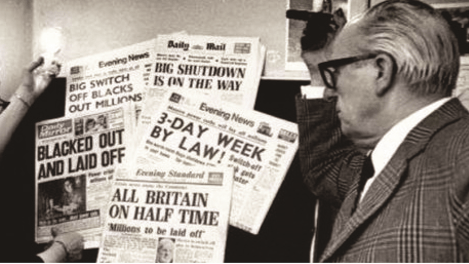 Martin Thomas, Islington South CLP, was an active socialist and trade unionist in 1974, when Britain elected a Labour government seen at the time as left-wing. Here, in an article for the Clarion issue #18, he draws out some of the lessons from that period.

Denis Healey, the Chancellor in that 1974 government, told the Labour conference in October 1973: “There are going to be howls of anguish from the rich”. He followed up a few days before polling with the promise to “squeeze property speculators until the pips squeak”.

The Labour manifesto summed up by proposing “a fundamental and irreversible shift in the balance of power and wealth in favour of working people and their families”.

Plenty were sceptical about whether Healey and the new prime minister, Harold Wilson, would deliver. Yet this was a Labour government brought to power on a wave of working-class militancy and radicalisation, a government of a Labour Party which had won an election called by the harassed Tories on the theme “who rules, government or unions?” by siding with the unions.

The Labour government reflected both the political inadequacies of the labour movement as it was then — and the strength, confidence, and political reach of that movement. We don’t think of the 1974-9 government as a “left government”, but it promised far more leftism than Labour does today.

The manifesto sided with the miners, whose industrial dispute with the government had spurred it to call the snap election. The Labour government quickly settled the dispute on the miners’ terms.

It quickly repealed Tory anti-union laws, and laws which forced councils to raise council rents. It legislated protections for private tenants and the homeless. It introduced the Equal Pay Act, the Sex Discrimination Act, and the Health and Safety at Work Act.

They were scared. By June 1975, Jack Jones, the leftish leader of the strongest union, the TGWU (now part of Unite), was so convinced of the danger of a military coup against the Labour government that he persuaded the government to scrap its manifesto commitment against binding wage controls and introduce a flat-rate limit on pay rises of £6 per week (about £60 today: remember, inflation was 24pc).

The top layers of the ruling class were less panicky — confident that Labour would administer capitalism passably. But in 1974, according to later testimony by Michael Carver, then Chief of Defence Staff, “fairly senior officers were ill-advised enough to make suggestions that perhaps, if things got terribly bad, the army would have to do something…”

Jones’s authority, many workers’ bewilderment at the economic chaos, and the fact that for some workers £6 was the biggest weekly pay rise they’d ever had, combined to make this pay limit effective. Strikes declined sharply.

By 1976-8 the government was imposing heavy cuts on the NHS and other social spending under the terms of a deal it had had to do with the IMF, and opposition from the parliamentary Labour left had collapsed.

In 1975-6 the mood on the “broad” grass-roots left could perhaps be described as unhappy but stunned. There were local anti-cuts committees. Industrial struggle revived bit by bit from early 1977, to culminate in large public-sector strikes in the “Winter of Discontent” of 1978-9.

By 1979, frustration had accumulated so that a big left surge developed in the Labour Party, around demands to democratise the party.

But by then workers’ confidence in industrial class struggle had already declined. It was not extinguished. The miners would strike for a full year in 1984-5, and at points in that year come close to defeating the Tories. But rank-and-file organisation was already thinner, the will to challenge incumbent union officials already weaker, the cumulative impact of many years of mass unemployment already greater.

The ideological, political, and economic-class-struggle aspects of the left response, all across the 1970s, were chronically out of kilter with each other. If we do not use the “sunny” times — the periods when most things seem to be going the left’s way, and so demarcation and education seem like unnecessary bother — to clarify and organise, then we will not have the means to tackle the “storms” when, suddenly, the difficulties are visibly greater.