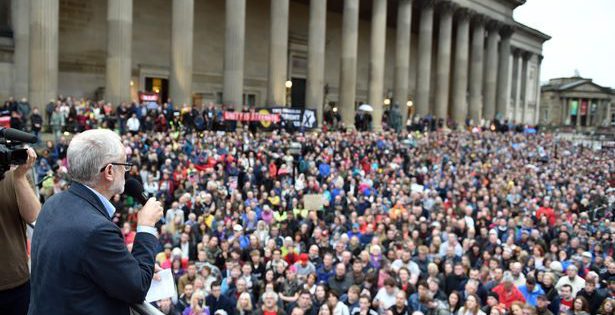 Three summers ago, Jeremy Corbyn was elected Labour leader off the back of a campaign that mobilised many thousands of activists, old and new, and encouraged tens of thousands more to see a future in the Labour Party.

Corbynism’s impact, more than anything else, has been to raise the stakes for the Labour left. It is difficult to overestimate the sheer extent of the demoralisation prevailing on the left prior to the 2015 leadership contest — inside Labour the prospects of even getting a left candidate on the ballot were slim, and outside a large section of campaign-oriented activists and socialists had given up on the possibilities of change within Labour altogether.

Corbyn’s campaign and victory represented a seismic shift. Now, the future
of the left simply cannot be separated from the fight for the Labour Party. Corbynism has renewed aspirations within Labour for more democratic party structures and cultures, and there have been wide expectations that the newmodel party will be truly member-led.

The appeal of Corbynism for the left outside the party was the value it placed on extra-parliamentary endeavours, from which most Labour MPs were aloof. Activists recognised Corbyn and McDonnell from their speeches at demonstrations and their presence on picket lines. They marked out a distinct path from the rest of the party’s concessions on austerity, on immigration policy and on welfare reforms. Corbynism therefore represented a chance to make the Labour Party not simply a party fixated on the ballot box; though as last year’s general election proved, not at the expense of success at the ballot box.

The promise of Corbyn’s politics consists of hope and courage, summarised by the thumping 2015 victory speech that stated “things can change, and they will, change.” That means resisting the temptation to make concessions behind closed doors and having faith in the movement to think and act for itself. However, as the Corbyn leadership consolidates itself at the head if the party, and sections of the left are cementing new hierarchies within the movement, we must make sure this isn’t lost.

On many issues — for instance advocacy of public ownership — the situation is vastly better than before 2015. On others — from the record of Labour councils to support for workers’ struggles to democratising and changing the culture of the party — progress has been slow. On others there has been regression — retreat on migrants’ rights, attempts to suppress left-wing dissent and critical voices not only by the right but by sections of the left, and a siege mentality in which even friendly criticism of or pressure on the leadership is viewed with alarmed hostility.

We need to fight for Labour’s conference to be the place where key policies are decided, not manoeuvring in closed offices. This means talking about what divides us as well as what unites us. We can no longer keep Brexit away from the agenda — Labour’s Brexit policy must be decided by members themselves. Certainly it will be a difficult debate to have, but that is precisely why we must have it. We need political clarity on a looming Brexit that will have huge ramifications for the NHS, climate change and jobs, and clarity comes from discussion, not handing down lines. We need to defend and fight to extend free movement.

Beyond conference we need to get to work building a movement that lives up to Corbynism’s promises. The Labour Party cannot sit back as the far right is able to attack trade unionists and bookshops, nor should we see it as someone else’s job to do the anti-fascist organising. From branch to branch, the party must organise itself to defend the labour movement from attack.

We need much bolder policies, policies adequate to the struggles we face today, and solid campaigns around them. We need support, real, active, mass-mobilising support for workers’ and community struggles. And above it all we need a ‘socialist horizon’, putting the debate about comprehensively transforming society back on the agenda.

The soul of our ‘Corbynism’ is about our willingness to envision and fight for a better world, and the need to build a stronger, healthier, more democratic and more radical movement to lead this fight.