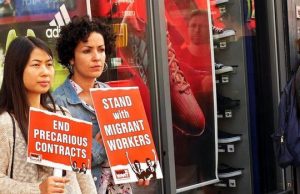 “The reason why I’m on strike – the reason I joined the union – is that workers deserve better wages than they have now. I think we can all agree that it’s pretty crap right now. But what’s particularly inspiring about this campaign is workers who were previously viewed as unorganisable by the labour movement, people who will drift in and out of work, and just basically you weren’t worth the unions’ time – now I think that’s changed, and I think the McStrike has proved that there’s no worker who you cannot organise, and there’s not any workforce that you can’t inspire to go out on strike and fight for their rights. Because we have Wetherspoons, we have TGI Fridays, we have the couriers, we have the people from the [Ivy House] pub, who basically are precarious young workers who have come out on strike fighting for their rights. I think it’s possible for us to win and I’m inspired by all the work here today. But it’s only possible for our campaign to win if we’re a united class, a united workforce. That means defending the rights of migrant workers, and within the labour movement fighting and defending free movement, fighting and defending the rights of migrant workers within the [Labour] party, within unions. It’s impossible for us to win if we have a divided class. The McStrike can win – but only if we start to build our unions, not build borders, and continue to fight for those rights.”

“I’ve just taken part in the most historic day in the fast food sector and the birth of a new labour movement across the United Kingdom, of organised hospitality and fast food workers. But also what we see in the fast food sector is lots and lots of migrant workers. Those works, some of them come from Europe and some of them have come from outside Europe. The Bakers’ Union firmly believes that freedom of movement shouldn’t be determined by a trade deal. It should be a human rights, and no matter where you’re born or where you come from, that’s an irrelevance, wherever you choose to live and make your home, that should be your right, that should be your human right.”