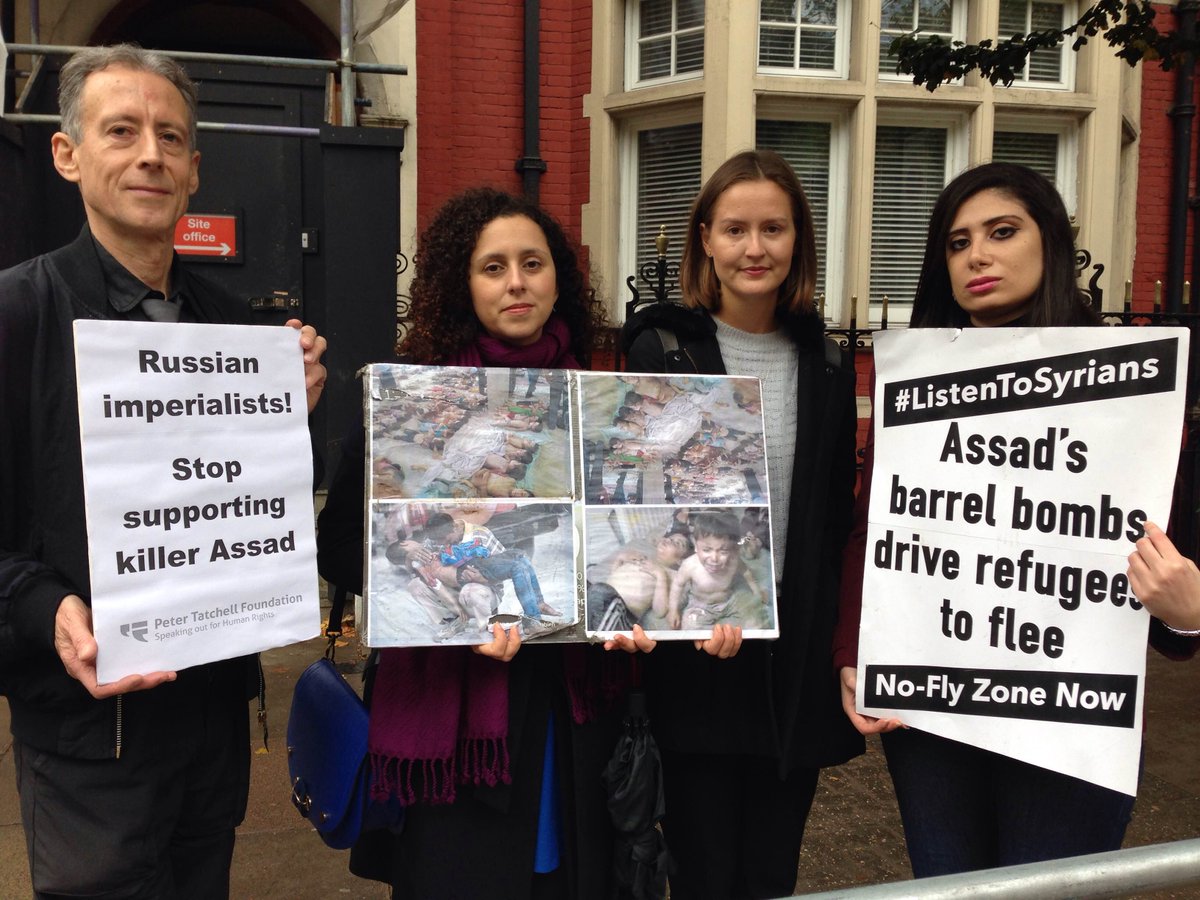 Renowned left and human rights campaigner Pete Tatchell spoke to The Clarion about his views on the way forward for the left.

In August August you debated a couple of very vocal supporters of Assad’s war on the Syrian people, Vanessa Beeley and Peter Ford. What were your observations of that debate, the arguments of your opponents and how they were received?

My critics promoted ten fundamental lies: that the 2011 Syria democracy movement is a myth; that the White Helmets civil rescue teams are a jihadist front organisation; that the claimed civilian casualties of Assad’s and Putin’s bombing campaigns are actors staging propaganda videos; that there were no chemical attacks by Assad; that human rights organisations like Amnesty International are tools of western security services; that everyone in the anti-Assad regions of Syria are terrorists or supporters of terrorists; that the local democratic community groups who run municipalities in liberated free Syria are controlled by Islamist extremists; that Assad has won free and fair elections and is a legitimate president; that the documented Assad torture centres and photos of torture victims are western fake news; and that anyone – including me – who opposes Assad is a terrorist supporter and a supporter of western military intervention – which I am not.

Astonishingly, nearly half the leftish audience at the Beautiful Days festival agreed with them, including Labour MP Chris Williamson. I was shocked and stunned that so many apparently progressive people could swallow these outright fabrications and apparently endorse the false, immoral narrative of the fascist dictator Assad and his neo-imperialist backers, Russia, Iran and Hezbollah.

You have been critical of the stand of Labour on Iran and Syria, both Jeremy Corbyn and Emily Thornberry. Why do you think criticisms by Corbyn and Thornberry of those countries has been so muted?

I think the understandable desire to get rid of the Tories and get Labour into power has led to muted criticisms of Jeremy and Emily by some left activists. They don’t want to rock the boat or, as they see it, aid the enemy Conservatives. I don’t accept that argument. The leader’s stance actually weakens Labour and gives the Tories ammo to undermine the party and its electoral prospects.

A small minority of activists reject entirely the criticisms of Assad and Putin. They are driven by conspiracy theories, a scepticism of the mainstream media and by an over-riding opposition to western foreign policy; the latter being frequently justified but surely not a justification for supporting a war criminal regime.

There is also a section of the left, and this seems to include Jeremy, that frames its politics in terms of anti-Americanism. The US is deemed to be the ‘Great Satan’ – it often is, as in Vietnam, Iraq etc. This leads them to conclude that anyone who opposes the US should either be supported or at least not protested against, including the clerical fascist regime in Tehran and previously the anti-US Islamist ‘death squad’ militias of Muqtada al Sadr in Iraq.

We see the same shameful apologia about the Maduro regime in Venezuela, ostensibly because it is being menaced by the US. Early on, Chavez did many positive things to uplift the poor and to create a ‘bottom up’ grassroots socialist revolution. But then the party bosses and fat cats took over and began imposing a ‘top down’ command revolution; easing out the spontaneous autonomous movements.

Today, the Venezuelan regime shoots peaceful protesters, muzzles the media and judiciary, jails opposition candidates and is allowing the poor to die by failing to ensure the availability of food and medicine.

After protesters were gunned down in Caracas, Jeremy’s most notorious comment was to say that he condemned “all violence”. He could not bring himself to name and denounce the murderous anti-working class regime of Maduro, which has been responsible for most of the violent acts. In this sense, Jeremy was echoing Trump who equated pro-Nazis with anti-Nazis when he condemned “all violence” after an anti-fascist protester was killed by neo-Nazis in Charlottesville.

Jeremy’s and Emily’s muted criticisms of Assad and Putin over Syria contrast with their loud and repeated condemnation of the Saudi tyranny and its war crimes in Yemen while simultaneously remaining silent about the war crimes committed by the Houthis with the aid of their Iranian backers. These inconsistencies and double standards are hugely damaging to the credibility of the left.

I am of the old school of socialist internationalism that says we must stand in solidarity with all oppressed people everywhere and fight all tyrants whatever their political hue.

There is speculation about Corbyn’s successor as Labour leader, some have even proposed Chris Williamson. What should be learnt about the failures you have identified on Labour’s foreign policies and how can Labour address those problems in its debates and leader selection process?

Change won’t happen unless members and voters demand it.

What are your expectations, hopes and fears of how the Labour Party might change in the year ahead?

I see no indication that the Labour leadership is likely to change its foreign policy stance or that there is any significant push by grassroots members to get it to do so. There are, of course, party members who want change but they are not very active or well organised. Too many are Blairites and on the right of Labour. They oppose the whole Corbyn project, much of which I support.

On domestic policy, Corbyn and McDonnell are on the right track; especially with ideas like taking the railways back into public ownership, ending austerity, rebooting public services, employee representatives on company boards and workers being given a share of their company’s profits.

There has been the woeful mishandling of the antisemitism row and Jeremy’s refusal to express any regret for his association with the anti-human rights, terrorist-supporting movements, Hamas and Hezbollah. He rightly and frequently condemns Israeli policies towards the Palestinians. But how many times has he also condemned Hezbollah and Hamas for killing civilians, promoting anti-Jewish propaganda, suppressing civil society and for abusing the human rights of women and LGBTs?

And what about the time Jeremy spoke at an event celebrating the 35th anniversary of the Islamist seizure of power in Iran in 1979? He never uttered a single word of criticism of that murderous, racist, sexist and homophobic dictatorship – a regime that hangs critics on trumped up charges, jails and tortures trade unionists and persecutes Sunni Muslims. How can any socialist collude in any way with such a vile clerical despotism?

If Jeremy expressed regret and remorse for this collusion, many people would forgive him and move on but he won’t. Sorry seems, for him, the hardest word to say.

Then there is Jeremy’s continued backing of the corrupt first-past-the-post electoral system, which has meant that no UK governing party has ever won a majority of the public vote since 1931. Every single one got to power based on a minority of the popular vote.

Labour’s commitment to proportional representation, similar to the system for the Scottish and London elections, is not only the right thing to do from a democratic perspective. It would also win tactical votes from some Lib Dems and Greens, which could help secure Labour victory in marginal constituencies.

Nor will Jeremy back a progressive alliance of anti-Tory parties to oust the Conservatives from power. If parties agreed to stand down for each other in key constituencies to give the candidate most likely to defeat the Conservatives a free run, 30-50 Tory MPs could lose their seats and Labour would be more likely to be in pole position to form the next government.

Despite Labour’s sectarian intransigence, the Greens stood down for Labour in over 30 seats at the last election; helping Labour candidates to win. Not only did Labour not reciprocate, it did not offer a word of thanks. Instead it actively tried to boot out of parliament the Green MP, Caroline Lucas.

Jeremy’s inner circle seem to be stymied by a laager mentality where they react to often unjustified attacks by battening down the hatches and switching to defensive mode; even refusing to be interviewed to counter the smears thrown against him. I well remember Talk Radio telling me that in the 18 months after he ran for Labour leader Jeremy turned down over 30 requests for interviews. These were great opportunities to get his message direct to a vast radio audience but he apparently declined. This doesn’t make sense. A leader needs to communicate their ideas to the public and via live, uncensored interviews is one of the most effective ways to do this.

Despite my criticisms from a left-of-Labour perspective, I want Labour to win the next election but I fear that bad judgement, inconsistent policies and political sectarianism might lose it. That it heart-breaking because, given the Tory disarray, Labour should romp it.