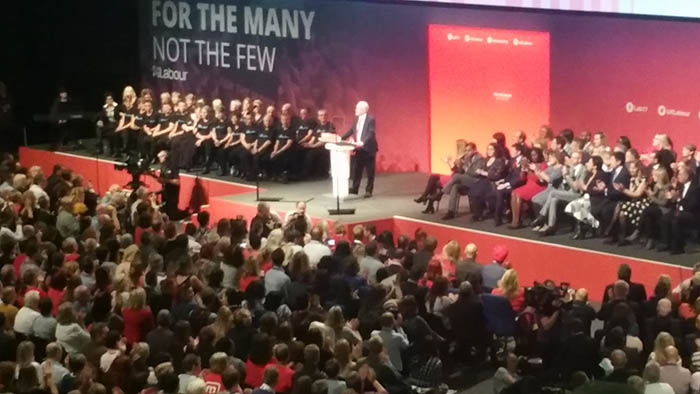 • For notes on The Clarion‘s activities and intervention at the conference, see here.

Labour Party conference saw progress on both democratic reform and policy, but the consolidation of a top-down, bureaucratic, ‘left’ machine in the party also progressed. It showed the need for a bigger, stronger critical left which organises in political independence of the leadership and is willing to criticise and pressure it.

Paul Mason recent wrote eloquently about the need for a vibrant grassroots workers’ movement. Such a movement cannot be built up at will, certainly not quickly – although there is a lot more Labour could do to help than it is currently. Immediately, though, one important part of regenerating a living labour movement would be converting Labour Party conference into a meaningfully democratic body which actually decides Labour’s policy and direction. To put it diplomatically, we are not there yet.

The party machine and, as far as you can tell the leadership, still insists on compositing producing a single motion in each area of debate. More radical left-wing text is either incorporated into a composite and then ignored – as happened with repeal of the anti-union laws last year; or pushed off the agenda completely by denying the proposers the right to a separate motion – has happened to Stevenage CLP with free movement and migrants’ rights this year. There also seems to be some revival of the practice of arbitrarily ruling motions out of order, as befell our our motion on climate change.

The policies announced to the world (and, above all, the press) by the leadership and shadow ministers in their speeches bear little relationship to what has been proposed, discussed or passed at conference. As far from left-wing New Statesman writer Stephen Bush explains, the Corbyn leadership is fully integrated into this way of operating.

Many activists operate with a kind of split consciousness, where it is legitimate to discuss more radical policies but unacceptable or at best little-thought-of to organise and debate for them in the structures of the party, where they can have some impact. Hence much of the debate going on at The World Transformed – for all its limitations, a vibrant event – finding relatively little reflection inside the conference.

Naturally the deviations of the leadership-announced policies from the policy passed by conference, and more generally enjoying support among Labour activists, is always to the right. An important example but one of many: Angela Rayner pre-empted the passing of a motion committing the party to abolish academies by announcing to the press that Labour would halt academisations and allow it to be reversed in limited circumstances. Naturally, she did not refer to the motion going to conference at all.

For all that they contained plenty of crowd-pleasers for lefties, Corbyn and McDonnell’s speeches felt into the same category. The policies they contained had been decided from above, and were inadequate to challenge the neo-liberal consensus in the name of radical social democracy, let alone go further. (We will analyse their speeches separately soon.)

All the talk about Corbyn’s politics becoming “mainstream” reflects this reality. Of course ‘Corbynism’ has significantly shifted the political mainstream; but it has also been shifted by it, losing some of what critical edge it had. The leadership is getting ready to form a “radical Labour government” that is really not particularly radical.

The issue of the anti-union laws, around which The Clarion was extremely active at the conference, focuses this problem. Until 2015 it was taken-for-granted demand of the Labour left, one that Corbyn and McDonnell naturally championed. In early 2016, Corbyn still argued for it. Since then Labour Party conference voted unanimously for this policy – the most important thing Labour could do to help revive workers’ struggles – and yet the leadership has dropped it.

Have the leaders of the big unions told the leadership that they don’t support this policy? But then the question is why Corbyn and McDonnell do not make a pitch for rank-and-file union and party support – particularly when it is now the official, voted-for policy of not only almost all unions but Labour Party conference.

The political roots of the problem are different but the issue of Brexit highlights the same problem of top-down politics: again, this deserves a more detailed analysis and some serious debate. Suffice to say, for now, that the leadership is firmly in control of how Labour’s real-world stance on Brexit will evolve. To imagine that the left is now coasting towards the transformation of Labour’s position would be a serious mistake. Determined criticism and pressure, not celebration, is necessary.

That is particularly the case as it is clear that the ‘untouchable’ core of the leadership’s stance is a refusal to shift significantly on the issue of migrants’ rights – shown not just by the fate of the Stevenage motion but by a determined and unfortunately successful drive to get closing all detention centres out of the Windrush motion. Warm words about migrants not being to blame are no substitute for changes in policy.

The picture is not all gloomy, far from it. On some issues at least, delegates at the conference demonstrated a spirit of revolt and self-assertion which if it is generalised and politicised on the right lines could make a major difference. The revolt, against great odds and pressure, to reopen the discussion on mandatory reselection showed great determination. The fact that the NEC’s rule change on reselection was relatively radical no doubt reflected that pressure. CLP delegates insisted on and in some cases won various other rule changes despite the opposition of both the NEC and the big unions. (For much more on the conference, and particularly on the debate around rule changes/democracy, see Lewisham Labour activist Dave Levy’s blog.)

Left-wing policy motions that were passed – for instance on schools, as last year on the anti-union laws and a number of times recently on the NHS – reflected pressure from below. Delegates made more use of the new ability to reference back particular bits of policy forum documents. Despite the unserious nature of composited conference motions, there were more serious speeches referring to policy, rather than just general rambles.

The problem is that such left-wing ferment remains relatively incoherent and disparate. This is true both in terms of a lack of thoroughgoing conception of democracy – left discussion and campaigning focused very much on the discussions about leadership nominations and selection of MPs and wider issues of democratising the party were neglected and largely shunted off to the future – and a lack of a clear conception of the current political limits of Corbynism.

To convert the left-wing aspirations of the delegates and visitors swirling around the conference centre, fringe meetings and World Transformed venues in Liverpool – and of the wider membership – into a really transformed Labour Party requires a bigger, clearer, more radical socialist left. Momentum is not building such a left – though still extremely influential at the conference it was less visible than ever as an activist force, let alone one organising to push things forward and to the left politically.

Such a left needs to be built in both Labour and the unions. The frustration of left-wing delegates with most of the unions over party democracy is understandable, but any trend to dismiss or try to downgrade the unions’ role in the party – such trends clearly do exist and were heard again at conference – should be resisted. The task, difficult and daunting though it is, is to transform both Labour and the unions into instruments in the class struggle.