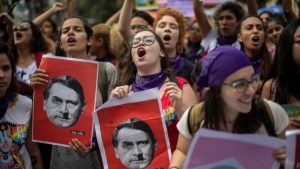 For anyone only familiar with European or US politics, looking at the scale and complexity of the Brazilian elections feels like staring into the gaping maw of a Lovecraftian horror. With 35 registered political parties (many of whom have almost identical names but wildly different policies) and a nominally proportional voting system in drastic need of reform, the last few decades of Brazilian elections have been victories for coalitions, with the Workers’ Party (PT, formerly led by Lula da Silva and later Dilma Roussef) and the Brazilian Democratic Movement (MDB) being the main players.

This year however, the Social Liberal party (PSL), who at the last election for the Chamber of Deputies secured just one seat, managed to come second with 52 of 513 seats and 10.1% of the vote. Their presidential candidate, Jair Bolsonaro, won 46% of the vote at the presidential election and is set to go up against the PT candidate Fernando Haddad in a second round on October 28th.

Prior to January 2018, the PSL was a relatively straightforward socially and economically liberal party, advocating primarily for free markets, limited state intervention, as well as a flat tax. The party was heavily influenced by an internal libertarian and minarchistic tendency knows as the Livres (“The Free”), who additionally advocated for cannabis legalisation and gay marriage on top of the party’s broadly economically liberal policies.

Massive anti-Bolsonaro in Sao Paulo protest shortly before the election

In January, Jair Bolsonaro, a former military Captain and member of the Chamber of Deputies (under the right-wing Progressivos party), announced he was joining the PSL, a move that was welcomed by then party leader Luciano Bivar but heavily criticised and rejected by the Livres, due to Bolsonaro’s hard-right economic and social ideology. Bolsonaro’s affiliation to the party led the Livres to split from the PSL, and the party’s policies to swing sharply to the far right. Although PSL’s nominal presidency is held by Gustavo Bebbiano, Bolsonaro is seen as the de facto party leader, and PSL’s policies have become interlinked with Bolsonaro’s own political stances, which are broadly racist, nationalist, anti-gay, anti-abortion, anti-woman, anti-communist, anti-immigrant, anti-environment, anti-NGO, and heavily pro-military.

On the surface it’s easy to compare Jair Bolsonaro to Donald Trump- both are outsider populists known for speaking their minds and making controversial, at times taboo statements, in an environment where a large portion of the electorate are distrustful of “mainstream” politicians and news. Both are taking advantage of a political and media sphere where big personalities, rather than policies, are what wins elections. But whereas Trump has the appearance of a lumbering oaf, surrounded by establishment Republican ghouls taking advantage of his presidency to slash taxes and pass vile anti-immigrant legislation while POTUS shouts incoherently at Fox & Friends, Bolsonaro is almost cartoonishly evil in a far more sinister way.

Bolsonaro is an open and ardent supporter of the Brazilian military dictatorship that tortured thousands, and refers to the military period as “20 years of order and progress” whilst using parliamentary speeches to praise known torturers like Carlos Alberto Brilhante Ustra as “national hero[es]”. In a 1998 interview, he stated that the Pinochet dictatorship in Chile “should have killed more people”, and later that Brazilian police weren’t doing enough killing themselves. This in addition to dozens of controversies in Bolsonaro’s time as a politician, including saying that he’d rather his son die in a car accident than bring home a man, that a fellow member of the Chamber was “too ugly to rape”, and that families seeking the bodies of dead relatives killed under the military dictatorship were “dogs seeking bones”.

It is telling that his presidential campaign coalition with the Brazilian Labour Renewal Party (PRTB) carries the slogan “Brazil above everyone, God above all”- a line that chillingly echoes the Portuguese fascist slogan “God, Country, and Family”. Unless something drastic changes in the next three weeks, Brazil looks set to elect an out-and-out fascist to its presidency, with a bolstered PSL primed to push through legislation in the Chamber of Deputies.