In 2012 the Fire Brigades Union moved a motion at TUC Congress for public ownership of the banks and finance, which was passed but never campaigned for. The FBU also published a pamphlet making the case which we republish here.

“This short pamphlet makes the case for a publicly owned ﬁnance industry that provides a public service, giving ﬁnancial support to industry and working people. Taking over the banks will enable planning, investment and the creation of millions of jobs. A publicly owned and democratically accountable banking system is essential to developing such a programme.”

The text of FBU General Secretary Matt Wrack’s introduction is below. 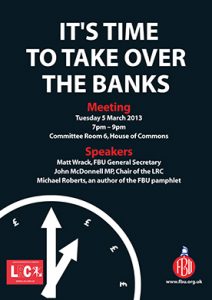 (Advert for a 2013 public meeting, with Matt Wrack and John McDonnell speaking, modelled on the cover of the pamphlet)

Working people in the UK and across much of the globe are facing horriﬁc attacks on living standards. Governments and employers demand greater and greater sacriﬁces: more wage cuts, more privatisation, the loss of hard won pension rights and the devastation of public services. These attacks are supported by the International Monetary Fund, the World Bank, the European Central Bank and a whole plethora of supposed experts on economic matters. Despite the drive for austerity, despite the wage freezes and wage cuts, the much promised economic recovery is delayed, delayed and delayed. Far from delivering prosperity, UK chancellor George Osborne has simply managed to deliver long-running stagnation.

In these extreme circumstances, the debates around austerity and economic issues have become central political issues in Britain and internationally. Working people want economic security, decent housing and public services, improved living standards and a decent future for the next generation. These issues are clearly linked to the long-term prospects for the economy. Increasingly they raise questions about what sort of economy we want.

The trade unions have rightly engaged in this economic debate, challenging the austerity agenda of the Westminster coalition. Why should the debate on the economy be left to the so-called experts in the world of economics? The same experts who by and large failed to see the crisis coming. The truth is that the economic experts are all too often just highly paid apologists for the status quo. History tells us that every time there is an economic crisis, those in power seek to pass the costs on to those at the bottom – and they have always wheeled out ‘experts’ to ‘explain’ why there is no other way.

Working people need to set a different agenda. We need to debate these issues in our unions, in our workplaces, colleges and in our local communities. We also need to debate them with workers in other countries. The vast majority know very well that the worldwide economic crisis was sparked by the banks. The majority also know that while mass unemployment destroys the hopes of a generation, those at the top are not suffering whatsoever. Top bankers are still being paid disgusting levels of bonus and billionaires are still avoiding paying their share of tax.

So the Fire Brigades Union has produced this short pamphlet as a contribution to the debate on the economy. It arises out of the motion on the same issue, which the FBU successfully moved at the Trades Union Congress 2012. We were very pleased that this was the ﬁ rst time that such a motion has been carried at the TUC. We hope it will be debated by our comrades in other unions and by other workers discussing the case for an alternative to the policies of the coalition government.

A few comments on what this pamphlet is not seeking to do. This is not a technical report on banking. It does not intend to address or answer every issue that arises from the crisis and the role of the banks within that process. It broadly makes the case for public ownership of the major banks. It does not claim that this measure alone will resolve the crisis or shift economic power into the hands of the majority. Nor does it suggest that this (or any single) measure in the UK alone would resolve the challenges we face. The events of the past few years have demonstrated very clearly how interlinked the world economy is and consequently the need for much greater collaboration between workers internationally.

It is truly appalling that we face mass unemployment and we see the growth of poverty and the return of food banks in one of the richest countries in the world. It is appalling that the UK has a million young people unemployed. Every day the papers bring new horror stories about the impact of the economic crisis on ordinary people. So the debate on the way forward is too important to leave to the governor of the Bank of England, or to George Osborne, or to politicians in general. Working people and their organisations need to set our own agenda for a way forward. This is a small contribution to that debate.

• For a statement we promoted last year on public ownership of the banks, see here.
• For more on banking and finance, see here.