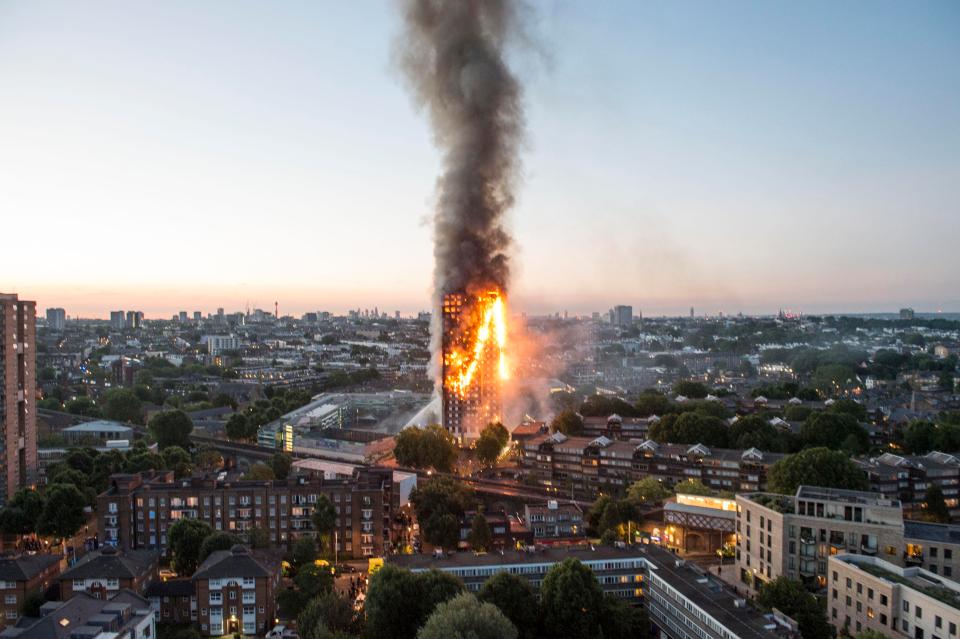 A wise person once said that when there is a tragedy, a lot of poetry is written. The Grenfell Tower fire is no exception, as the new anthology, ‘Poems for Grenfell Tower’ illustrates.

But the Grenfell Tower fire was not just a ‘tragedy’: it was an entirely avoidable mass killing, in which people died because they were working-class, in a building that had been clad in flammable material to save money and improve the view for its rich Kensington neighbours. Many of the poems in this book reflect that truth. It is an angry book as well as a sad one.

In his introduction to this anthology, David Lammy MP begins by arguing that ‘Grenfell Tower exposed a tale of two cities: one that has a voice and one that does not’ and concludes that, ‘Poems such as these are able to go beyond the limits of prose in expressing the impact of the tragedy. In doing so, they offer an important way in which the voices of Grenfell are heard.’

No escape only further ensnarement in poverty.
We can’t stop hurricanes or bombs or council policy-
makers who mask bees’ tracks, take the wild ones’
places, kill the people in their homes.

These poems include descriptions of suffering, bereavement and loss that are hard to read. Some of these poems mourn specific, named victims of the fire. Some reflect that many of the victims were immigrants, who had travelled far to find safety and prosperity but had found the opposite. Four are written in other languages, with their English translation printed alongside them.

Some paint a picture of the painful aftermath, the tributes, the donations, the fight for justice. Some mock and decry the profiteers, bureaucrats and double-speakers who allowed the fire to happen. One praises the Red Watch firefighters, and one is written by a Red Watch firefighter.

Most were written in the aftermath of the fire, but some were not written about Grenfell at all. They are included because they speak to social issues relevant to the fire, or to previous fires – those mentioned include the 1981 New Cross Fire, in which thirteen black youngsters died and which the police failed to investigate properly; and the 1666 Great Fire of London, a description of the conditions of which might not be out of place today:

where masses of labourers, tradesmen, paupers,
grudgingly given space beside the rich,
live and work inside a teeming maze.

Aficionados of poetic form will be pleased to find a sonnet, a villanelle, a concrete poem, and a couple of prose poems. Other poems take a form of their own. Some rhyme, some beat, some don’t. Some employ imagery, some come straight to the point. Taken together, they convey a purpose: to make sure that Grenfell Tower does not fall away from public attention, and that it is not just memorialised but never repeated.

I wrote my first poem about the Grenfell Tower fire on the day after it happened, no doubt one of many who did. At first, I was afraid to publish it in case people thought it was in bad taste. Since the fire, an establishment trying to hide its culpability has tried to shame those who have made legitimate political points about its cause. So along with many others, I decided to speak out. I am pleased that my poem made it into this book.

Bring your despair, your pain
And blend it in solidarity with others’
Bring it to the boil
Bring it into the enquiry room
And into the corridors of power
Bring the truth out into the open
Bring justice
Bring charges
Bring this system down

A wise person once said that when there is a tragedy, a lot of bad poetry is written. That is doubtless the case. But personally, I think the poetry in ‘Poems for Grenfell Tower’ is good poetry, as well as being poetry in a good cause: the ongoing fight for justice for the victims of the Grenfell Tower fire and for a radically changed society in which there is not an ‘unaffordable’ price on working-class people’s lives and safety.

‘Poems for Grenfell Tower’ was published on March 30th by The Onslaught Press, price £10, of which roughly half (depending on sales outlet) will go to the Grenfell Foundation, a new charity which is being set up to care only for the surviving victims and their immediate community, and to receive donations from artistic solidarity projects like this one. The book can be purchased online from the publisher, which unlike other online vendors protects the share going to the charity by charging p&p. Or come to one of the ongoing series of Grenfell fundraising events which have been triggered by this book: Artefact Cafe, Stirchley 8/6 19:00; RMT Education Centre, Doncaster 14/6; Dolman Theatre, Newport 14/6 19:30; Seeds for Thought, CCA, Glasgow 15/6 19:30; Scottish Poetry Library, Edinburgh 23/6 14:00; Cumberland Arms, Newcastle NE6 1LD 27/6 19:00; Poetry Library, Royal Festival Hall 5/9 20:00 – with others being discussed for Bristol, Liverpool etc. Full details in the Events at the P4GT FaceBook page.