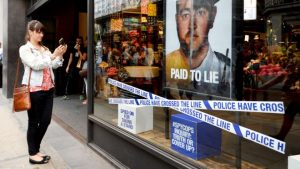 Lush UK has found itself in a media storm. Under the hashtag #SpyCops, the high street cosmetics chain has launched a campaign in support of Police Spies out of Lives (PSOOL) and the Campaign Opposing Police Surveillance (COPS). On 7 June, only a week into the campaign, Lush pulled all in-store advertising for it, citing safety concerns after reports of ex- and off-duty police officers going into stores to ask staff to take down their campaign displays. As of 13 June, the in-store advertising has resumed with new posters.

The #SpyCops campaign calls for major changes to the ongoing public inquiry into the infiltration and sabotage of activist groups by undercover police since 1968. A common tactic in these undercover operations was for officers to enter long-term relationships with individual activists, in some instances even having children with these activists to maintain their cover, only to disappear on completion of their mission.

The notion of being in a close relationship with someone for years, only to learn that they were an undercover cop all along, is so nightmarish it sounds like something out of a Hollywood thriller. Yet that is precisely the situation in which many campaigners and activists – primarily women – found themselves. Such operations were standard for undercover units like the Special Demonstration Squad (SDS) branch of the Metropolitan Police. Although the profiles of over 20 infiltrators have been gathered since 2010, given how undercover units have operated for decades in police forces across the country, it seems safe to assume that this is only the tip of the iceberg.

While it is more than a little bizarre to see a cosmetics shop famous for selling bath bombs spearheading a campaign into undercover police practices, it should be easy to see the importance of bringing these practices into the spotlight. Beyond raising awareness, Lush has stocked their stores with postcards addressed to Sajid Javid, the Home Secretary, calling for a panel of experts to assist the Chair of the Inquiry and for the release of the officers’ cover names, amongst other demands.

Despite all this, the campaign has met a venomous response from several quarters. In addition to the aforementioned intimidation of staff by ex- and off-duty police officers, thousands have taken to Twitter and to the review feature on Lush’s Facebook page to denounce the company for being ‘anti-police’. Such vitriol is often clothed in the ‘workers in uniform’ rhetoric around police that I have criticised elsewhere, with members of the public asking how Lush dares demonise the ‘heroic bobbies’ who work tirelessly to keep us safe despite Theresa May’s police cuts.

In reality, the larger politics of Lush’s campaign are fairly tepid and liberal. Lush takes the view that the police are generally a force for good, but we need them to be transparent and accountable so that they do not abuse their power. At no point does Lush critique the police as an enforcer of bourgeois authority established to protect the private property system. Nor should one expect Lush to do so: it’s a shop.

Nevertheless, the sheer volume of outrage that members of the public are directing against the campaign, rather than at the practices and cover-ups the campaign exposes, is genuinely staggering. As well as being a very ‘shoot the messenger’ response, such outrage seems rooted in a refusal to believe that there could be anything wrong with the police beyond ‘a few bad apples’. It’s as if all the lessons of the 1999 Macpherson Report on the Met’s investigation of Stephen Lawrence’s murder have been conveniently forgotten. One cannot approach racism, sexism, and other forms of oppression within the police as simply reflecting the personal prejudices of a few individual officers: one has to look at how the police institutionalises such forms of oppression within its operations, such that the kinds of horrors inflicted upon the women who were spied on become simply ‘part of the job’.

Let’s be clear: tricking women into having relationships and children with officers is a gross violation of their sexual consent and bodily autonomy. The undercover officers who committed these gross violations did so as an accepted practice within their units. While the victims of this institutional sexism might never receive true justice, it is right to demand that the police reveal the full extent of such operations.