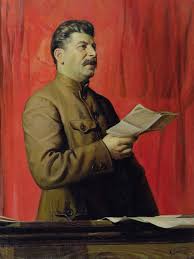 There has been a little resurgence of a terrible blight called Stalinism in some parts of the labour movement. Some people deny this is the case, but others are clearly beginning to suffer what what is being called Stalinoiditis.

Here are the symptoms you might have if you have caught Stalinoiditis:

1. Unconditionally supporting dictatorships like Assad and wishing that we had a ‘strong man’ leader

2. Providing left cover for TU bureaucrats (for instance in the UCU recently)

3. Opposing freedom of movement on the grounds of socialism in one country outlook (same with Lexit, obsession with regeneration of British industry by British capitalism, etc – all classical Stalinist positions)

4. Threats of violence against others in the movement (pictures of icepicks, intimidation at meetings – treat a Trotskyist like you would treat a fascist, etc)

5. Soft soaping historical Stalinism, undermining left criticisms of Stalinist regimes as a “joke” which actually is intended to pave the way for rehabilitation of Stalinism

6. Looking at tanks wistfully and having photos of Soviet military hardware on your phone

7. Acting really ‘working clarsss’ and going on about hanging paedophiles like what working class people do, whilst also trying to finish that Post-grad/Phd you have been doing.

You may also find yourself attracted to certain forms of behaviour that are reminiscent of 4Chanitist, a similar problem on the far right.

Do you say and do Stalinist things whilst claiming it is only a joke, or that you can’t be criticised for it because it is a joke, just a joke?

Do you find yourself doing ironic in-group hand signals that only the initiated get like the ‘finger of vigilance’?

Have you started calling people you don’t like ‘Trotskyites’?

Do you call things ‘operation icepick’ or look at icepicks and feel a strong urge to hold one?

Help is available, contact us and help stop the contagion!