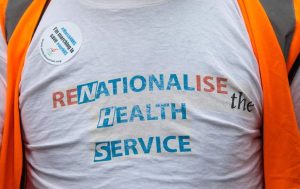 This article was written and published just before Labour Party conference.

Following years of Labour activists coming up against pig-headed commitment to marketisation, Corbyn finally entered as the first leader opposed to making healthcare about profit – a core feature of his leadership campaigns.

A responsibility remains for activists to ensure the leadership is aware of the issues and is confident in pushing on them. Corbyn has continued saying the right things in some of his own statements, but the party message remains less than clear, with the particularly misleading narrative that “underfunding” basically explains everything. Diane Abbott, when she was Shadow Health Secretary, began to oppose the actual policies attacking the NHS, but that quietened when she left.

Discursively, campaigners have shifted Jonathan Ashworth quite far, which doesn’t necessarily equate to a change in thinking or policy. In the small print, policymakers have shown scant will to break with the Establishment consensus, forged by private healthcare interests. That consensus includes scrapping the comprehensive nature of public healthcare, opening increasing areas to the market. Simon Stevens, a United Health CEO and private healthcare lobbyist, heads the unaccountable quango behind the policies shaping the NHS. He was an adviser to Blair and retains a friendly relationship with sections of the party. Privatisation is downplayed into a secondary issue of outsourced clinical services, so much that nominal lefties are asking for rail and gas renationalisation but merely a “properly funded” NHS — ignoring the damaging policies pretexted on permanent defunding. Left wingers, including Corbyn, have echoed this disproportionate focus too.

In a system burdened by decades of policies by and for profiteers, overturning the Health and Social Care Act alone is not enough. The whole value and purpose of public service need to be recovered.

Delegates have used new powers to “reference back” National Policy Forum report sections, telling party policymakers to scrap the private providers’ market and profit in the NHS — which both report and manifesto had subtly pledged to keep.This year’s report, deadpan, acknowledges “the specific wording”is no longer the agreed position and won’t be used again. Left-wing activists, including from Momentum NHS, have succeeded in getting motions submitted by many CLPs and then pushed through, in 2012, 2016 and 2017. Over the last year there’s been more noise, for instance from the NPF, about implementing 2017 conference policy, but this hasn’t profoundly reshaped the party’s policy or perspective. Ashworth has become somewhat more open to meeting and discussing with NHS activists. But in line with last year’s composite 8, Labour would be setting out an NHS renationalisation policy “as per the NHS Bill” promoted by campaigners. Instead, there is talk of a consultation on the subject. It’s unclear how this relates to the policymaking process.

This year, left-wing NHS activists, including people who have been involved in Momentum NHS, have produced two conference motions. One concerns technology as a vehicle for downgrading and privatising the NHS, like second rate, private ‘GP apps’ that destabilise GP surgeries. It calls for Labour’s technology policies to differentiate themselves from this approach. The second concernsthe deliberate reduction in NHS provision in order to expand private provision.

We’d also love to see more referencing back this year. It’s needed! [In fact there were various references back and they all passed – la lutte continue…]