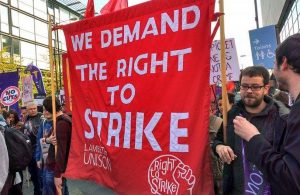 Following the policy on repealing the anti-union laws and re-establishing the right to strike passed at Labour Party conference in 2015 and 2017, this year’s conference again resolved (in the Brexit composite!) that:

So conference’s policy has, though in only a few words, once again been clearly stated. But as was explained by one delegate, that doesn’t automatically mean it will be campaigned for and carried out.

We’ll be stepping up the campaign to make sure it is. For how you can help and get involved, see here.