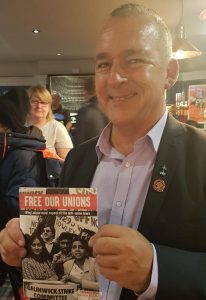 My union and others have learned through years of experience that the most eﬀective way to win for our members is to take strong industrial action. We have also learned that the anti-union laws are designed to stop us doing that. Law after law has tied us up tighter and tighter.

It’s great that the Labour Party’s leadership is pledging clearly to repeal the 2016 Trade Union Act within one hundred days of taking oﬃce. But that will undo only the most recent shackle on our unions. It will only take us back to 2015, when we were still tightly bound by onerous balloting requirements, restrictions on what we were allowed to strike about, controls on our political spending and more.

We want all the anti-union laws repealed! We also want positive rights enshrined in law: most importantly, the right to strike, including over political demands and in solidarity with others. As our late General Secretary Bob Crow always argued, we want to repeal and replace these laws: we want to reclaim our rights.

I’m very pleased with the socialist direction in which Jeremy Corbyn, John McDonnell and their supporters have been trying to take the Labour Party over the last three years, and also pleased that Labour’s recent conferences have voted unanimously for the repeal of all the laws that restrict eﬀective trade unionism.

With Labour’s leadership being attacked by the media, the Tories, the employers and right-wingers within its own party, it needs our support and encouragement to campaign conﬁdently for this crucial policy.

Labour’s 2017 manifesto showed that it is moving towards supporting working people and our struggles. This has inspired many people, and we have a new opportunity to get the anti-union laws oﬀ our backs. Sometimes it seems like our movement has accepted these laws, or that we say on paper that we are against them but don’t ﬁght them seriously enough. But we won’t win by accepting defeat!

I welcome this pamphlet and hope that it kick starts the bold and conﬁdent ﬁght we need to free our unions.

• For more about the pamphlet, see here. You can buy it at that link or using the button below. 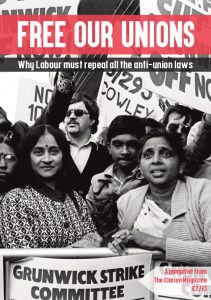