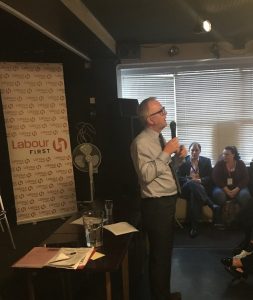 Seemingly a glutton for punishment, after attending the Progress rally on Sunday, I headed to the Labour First Rally on Monday night. The venue was the Liverpool pub – where funnily enough The Clarion‘s fringe meeting on repealing the anti-union laws also took place – rather than the more swanky Museum of Liverpool Progress held theirs in. The room was packed and a bit squashed, I’d estimate a hundred people there.

Janet Daby, who is the MP next door to me in Lewisham East, was neutral and displayed no factional bile at all in her speech. She made a plea for Progress and Labour First to encourage more BAME candidates and activists, and thanked Matt Pound and LF for helping with her campaign.

Oddly, when Ben Bradshaw and Caroline Flint began to speak they indicated they had been asked not to discuss Brexit on the platform. They didn’t explain why, I can only assume it was because they have opposing views, which they then went on to discuss anyway. I theorise this was because the rally overtly stated several times Labour First and Progress are in it together now. They advocated people joining and organising for Labour First or Progress, they were not bothered which. That was the key message, they were trying to get to people to organise against us in their CLPs, that, and to give them money. Neither is new of course. Even though they are somewhat demoralised, they are not resting on their laurels at all, and it wasn’t as depressed and despairing in tone as the Progress rally.

Most of the speakers were burning to criticise the moves during conference for open selection, declaring it shameful, a travesty, disgrace etc, etc. Pass me some matchsticks to keep my eyes open. Bradshaw and  others said “We should be working to get more Labour MPs not working to deselect them”. The prospect of them and their allied MPs having to go through automatic selection makes them absolutely quake. I’ve always thought if you could project onto a screen what’s actually in their mind, it would be destruction-laden images to Rome-burning proportions of their precious careers going down in flames. Let’s be honest, most of the outrage behind this is the feeling of entitlement of the party elite, and their fears, not about the movement, but about their jobs, and all the wannabes potential jobs and career ladders. Although, objectively, we’re starting to see more of this on the left too. Being a representative, such as an MP, is not supposed to be a job, it’s a duty.

Apart from open selection there was no other criticism or analysis of any conference motions or policy announcements from the shadow cabinet. They just got together to moan about how awful the left are. The obligatory pop at Chris Williamson MP was of course included by Richard Angell.

I stayed around after the meeting to chat, and was open that I was a Corbyn supporter; the small group I spoke to were welcoming and polite. Keith Dibble even thanked me for coming to listen which I thought was a really great approach. We all had a good chat in which, among other things, I asked them about open selection.

I indicated I really didn’t see the problem with all representatives routinely, as standard, being expected to go through a selection. It’s democratic, it should be completely normal procedure. The gist I got was that it was difficult for them to disagree in principle, but they could not agree because the left would use it as a factional tool to get rid of their MPs. It boils down to, they agree with democracy until the point it becomes disadvantageous to their small faction. Of course the problem is, if you only favour democracy when it favours you, you don’t really believe in democracy. However, we disagreed with civility about politics; I don’t know why some people find that so difficult.

Someone who clearly does find it difficult is Ian Austin MP. I will not beat around the bush on this: Ian’s speech was completely disgraceful, the absolute worst I have ever encountered from any party official or member. Wes Streeting is awful, but this bloke Austin, is even worse. It takes a lot for me to say this about one of our own, a hell of a lot, but it is a total embarrassment to me that he is a Labour MP. He viciously denounced Corbyn and the left. It was as though the Daily Mail had written the speech. I’m not exaggerating, list every attack from the right-wing press over the last few years of Corbyn and the left and he wheeled it out. This was to the extent he thought McDonnell even mentioning Karl Marx was contemptible. How socialists engaging in analysis of vast, academic schools of thought such as Marxism is a problem, I cannot fathom. I’ve heard numerous right-wing journos try to disingenuously make that point.

Again, I’ll state, I’m really open to listening to others’ policy and political ideas, that’s how I ended up in the room. We all should live that ethos and respectfully debate our political differences. It will make us an intellectually richer movement. Austin had no interest in that; it was just hate and outrage at his view of the party being stolen by members, away from him and a few of his cronies. I felt the centrists, and few right-wing members in my CLP, probably some of yours, and even some of those in the room would be embarrassed by this kind of vitriol and can only hope they don’t feel the same as he does.

To all the MPs worried about their jobs: why not try listening to us, engage with our ideas, struggles and vision to rebuild Britain. Here’s a novel approach: become actual class warriors and the loudest advocates of left-wing socialist ideas for us, rather than against. Stop obsessing about Corbyn. Most importantly stop talking about us as though we are scum, or dirt invading the bottom of your shoe, then maybe you won’t get made redundant. Maybe.