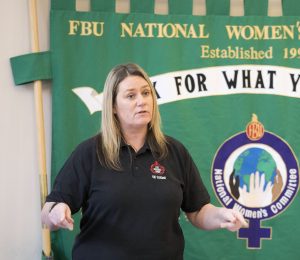 Scottish FBU Secretary Denise Christie gave this speech at Labour Party conference on 24 September. For the policy she was referring to, and campaigning for it be carried out, see here.

“Thank you conference, Denise Christie, Fire Brigades Union. And for the record I’m a firefighter, not a fireman, for all those media outlets out there.

“Conference, I want to refer to the Economy, Business and Trade Policy Commission annual report; specifically the paragraph on repealing the Trade Union Act on p32.

“Last year conference passed the Composite 4 motion on workers’ rights. That motion also included the quote: ‘To repeal the TU Act and anti-union laws introduced in the 1980s and 90s’. Yet when you read that paragraph in the annual report, it’s a bit wishy washy. The paragraph goes on to say: ‘The Commission was delighted by the positive contributions and lively debate on this topic. It agreed with the need to improve collective rights by repealing the Trade Union Act, rolling out sectoral collective bargaining and guaranteeing a union right to access workplaces.’

“But it further goes on to say – and this is the wishy washy part – ‘it noted that Labour’s task was now to deepen these ideas’.

“So conference, it really is deeply disappointing that the strength of that motion passed last year is not reflected in the annual report. And when we do go into government – because we will, and it will be soon – we won’t be noting or deepening anything, but making sure this is taken off the shelf and that policy is in place. So I hope that will be reflected in next year’s report. Thanks.”