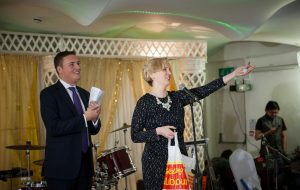 There is little point in only listening and talking to people who agree with you. In that vein, I headed to the Progress Rally at Labour Conference. As more people entered  the standing room, the attendees racked up to only about 130; far more men than women. What was I expecting here? Possibly a different angle on some issues being discussed at conference that would challenge my (socialist) point of view, and to see what the centre and right was talking about at conference.

I should not have been surprised, but I was disappointed by the overall level of condescension, mockery and disrespect of left MPs and everyday members that the speakers demonstrated, and the lack of actual policy discussion. I was hoping it had moved further past this. I was left with the distinct impression they do not understand the Corbyn project at all; it’s not only that they disagree with it, it’s that they just do not get it.

Most of these speakers referred to the left “navel-gazing” during conference. Trying to democratise the party and wrestle it back from the centralized control-freakery of their ideals is “navel gazing” apparently. Trying to improve democracy to make sure that MPs don’t feel and behave as though they have a job for life, and crucially that we have people that actually represent us they called “navel gazing”. Newsflash: you get selected for a term, not forever.

Streeting began immediately with ripping into two of his parliamentary colleagues, Chris Williamson MP for his roadshow and Dawn Butler MP for the comment about Militant. Total disrespect and dismissal to them, not political but personal, and then three minutes later – with no irony – denounced the “toxic” atmosphere into party, after just using his platform to slate his colleagues! Absolutely blind to the hypocrisy of that. He was not the only one who chose to denigrate other Labour colleagues. By the way, Wes, you’re not the only one from a council estate; most of us didn’t go to Cambridge and work for PWC afterwards though! Don’t condescend to me, a working-class woman and ordinary party member, after you’ve become part of the establishment that screws me over on a daily basis.

We move on to the haughtiness of Stella Creasey. Wow. Fellow lefties, I’m sad to say I’m pretty sure she absolutely despises us. To be honest, I also think Aaron Bastani is more or less an “absolute melt”, but she was mocking and derisory to all of us not just him.

Seriously? Said with a huge superiority complex from Stella, another Cambridge graduate. When I’ve spent years working for minimum wage, and like so many of us, spend hours of my life every week volunteering for the party and trade union, I really don’t appreciate being talked down to by one of our own MPs so vehemently about her cowardly, compromised and triangulated version of “socialism”.

Overall, it was less like a rally and more like a session of consoling and self-comfort. Most of the speakers referred to how difficult, how hard and demoralising things are; cue a circle of metaphorical back pats. Seemingly oblivious to the insults, derision and bullying myself and other supporters of the Corbyn project have been subject to by them, including those they had just engaged in. Most made a plea for people to stay in the party, i.e. because people don’t agree with your soft attempt at socialism and unwillingness to challenge the status quo, you don’t have to throw your toys out of the pram and leave.

The nature of politics is that people often disagree, it’s time we got all got used to that and remembered the broad church. Maybe also wake up to the fact your ideology is dead in the water. The degree to which they were trying to reassure each through their obvious despair almost made me feel sorry for them… or I would if they were not constantly trying to sabotage the best political opportunity my class has had in a generation.