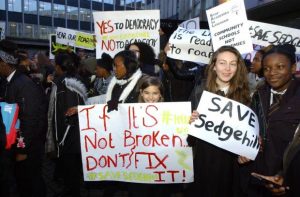 By a teacher, NEU activist and Labour Party conference delegate

One of the model resolutions for Labour Party conference produced and promoted by The Clarion was “Stop the academies disaster: a democratic, local authority schools system”. (You can read all our model motions here.)

Four CLPs submitted amended versions and, as a result, a composite motion is going forward to conference today (Monday 24 September) which includes the following:

“Academisation is incompatible with an egalitarian and democratic education system serving the many, not the few…

“The main task in education for a Labour government will be to recreate a coherent, planned and appropriately funded national public system which is accountable to its various stakeholders and communities. However, the principles of accountability and collaboration which are central to our NES charter cannot be implemented whilst the current fragmented and semi-privatised school system persists. Conference agrees that in government, the Labour Party will bring all schools back under local democratic control including academy and Multi Academy Trusts. Therefore proposals to wind up MATs and turn over control and management of schools to local democratically controlled structures should be developed urgently.

“Conference agrees that the Labour Party should work with the teaching unions, the SEA, academics and others to take this policy forward as a matter of urgency.”

(Our emphasis. For the full composite see p16 in this PDF.)

This is potentially a big step forward. We need an organised push by Labour, teacher/education worker and schools activists to ensure this policy is not watered down but deepened and developed; but also, most importantly, to ensure it becomes an actively campaigned-for Labour Party stance!