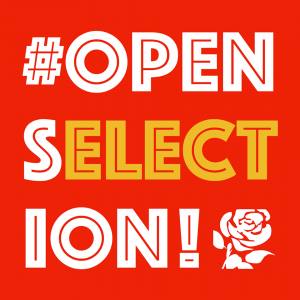 Joe Bilsborough, an activist in Labour International CLP and the Labour Party Open Selection campaign, spoke to The Clarion a couple of weeks ago for our issue 18.

Why and how was the campaign set up?

Back in 2017, Labour International, the CLP for all members living abroad, balloted members on what – if any – motion they should send to conference. A Rule Change motion, amending the section of the rulebook pertaining to the selection of candidates, was the winning motion, with 62% of the voting members backing it.

The campaign followed naturally from this: there was significant enthusiasm around the motion, tempered with a feeling that it would be an uphill struggle to get it to reach the floor.

How has it developed? Who is involved? What can people do to support you?

The campaign is primarily run by members of Labour International: many members are able to draw on their contacts in CLPs and union branches back in the UK from their time there, which has been a big help to us.

Time is short before Conference, but there are a couple of things people can do that would really help. If they’re a delegate, it would of course be greater if they would support the motion! We’ve put together both a guide to Open Selection, and a short video introduction, both of which are useful resources which it would be great to get shared as much as possible leading up to conference. If your CLP or branch is going to meet before conference, we’ve also put together a model motion you can pass in support.

At Conference itself, we’re holding a fringe event with Paul Mason, Chris Williamson MP, Huda Elmi, and Rachel-Godfrey Wood: you can register for that here.

What are the main arguments against you’ve encountered and what are your replies?

Stephen Bush, who I think would himself agree he is not exactly on the left of the party, tweeted just the other day that ‘the longer you look at the current process, the harder it is to square it with any democratic norms’.

Labour’s current system, as Bush writes, ‘offers the incumbent considerably tougher protections than those afforded to any other sitting MP in England, Scotland and Wales’. New Socialist ran a great piece recently looking at mandatory reselection from an outside perspective: ‘the debate within Labour around “mandatory reselection” looks decidedly odd. In the Scottish Greens we don’t call it that: we just call it “selection”, and to my knowledge no-one has ever suggested not doing it before each and every election.’

Personally, I find these arguments pretty compelling, from a purely democratic standpoint. Do we really want to be the most undemocratic party in the UK when it comes to selecting our representatives? I don’t think we do.

There are some good-faith arguments about how Open Selection will cause drama and acrimony. I actually think the opposite is true. Every MP would go through this process – whether you’re Jeremy Corbyn or Chuka Umunna, it’s exactly the same. It becomes non-discriminatory and thus, simply part and parcel of what it means to be a parliamentary representative of the Labour movement.

Other arguments centre on it not being ‘the right time’. I don’t agree here. If it isn’t passed at this conference, Party rules mean it can’t even be discussed again for three years. When it comes to something as fundamental as democracy, I don’t think it’s right to wait for the apposite moment. What if that never comes? We should do this now because it is fundamentally the right thing to do.

What response have you had among Labour members and activists?

Overwhelmingly positive. Without exaggeration. Sure, some members regard the proposal as ‘divisive’ or a ‘purge’, but most people see it for what it is: a democratisation of the selection process that empowers members regardless of faction. The response from grassroots members has been really encouraging.

What response have you had in the unions?

Jeremy Dear, Deputy General Secretary of the International Federation of Journalists, has endorsed Open Selection in a personal capacity. The Fire Brigades Union this year unanimously endorsed Mandatory Reselection; Unite did the same in 2016. It goes without saying, but if you’re a member of an affiliated union, and support a chance to the selection process – get in touch with them and let them know!

National Momentum has moved around on Open Selection. What’s your analysis?

If I’d been asked this a few weeks ago, the answer would have been a fairly straightforward one. Fundamentally, some motions ­– coming from CLPs like Brighton and Bristol West – which seemed to be based on Momentum’s model motion, would retain the trigger ballot. What would be altered would be the percentage needed in order to bring about a selection process. On the other hand, the Labour International motion does away with the trigger ballot entirely: it shifts the selection process to a simple, more transparent and democratic OMOV system.

Things have moved very quickly lately, though, and in a promising direction.

Momentum members received an email with the headline ‘Why we’re backing open selections’. A statement on Twitter expands on this further, rightly arguing that ‘Opening up the selection process… [is] an essential reform if we are going to transform Britain for the many, not the few.’

This important announcement, following on from an article by Rachel Godfrey Wood in New Socialist, which outlines the different motions heading to conference, and a later piece by Momentum’s national coordinator, Laura Parker, suggests Momentum has swung behind the grassroots attempts to democratise the selection procedure.

Let’s be clear: these are incredibly positive developments, but it’s crucial those in support of Open Selection keep up the pressure to ensure we don’t end up with a watered-down amendment.

How does this demand relate to the debate about what kind of Labour Party we want?

It’s quite a serious change in the power structure in the party, and well overdue. What does it mean to be a member of the Labour Party in 2018? Is your role simply to campaign when an election comes around? Or – as I believe – is it something more formative and fundamental, being involved in political discussion and debate, choosing who represents you; maybe even standing yourself.

The argument put forward in the recent Laura Parker piece – that if Labour relaxes its selection process, it could ‘find its own Ocasio-Cortezes’ – is a very compelling one. As she correctly points out, ‘a new generation of Labour MPs are being shut out by Labour’s restrictive, outdated rulebook.’ We have the chance to change this – let’s be bold and do so. Open Selection lets Labour members the best candidate, democratically, every election.

It’s been said before, but democratising the party is a necessary prerequisite for democratising the wider economy and country. There’s a fundamental paradox when the party putting forward proposals on democratising the economy has a less transparent selection procedure than the Conservative party. We need to democratise the Party – we have a great chance to do it at conference this year.