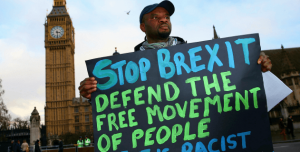 Below are two articles by Eastern European socialists living in Britain, both leading activists in Another Europe is Possible and the Left Against Brexit initiative. Ana is also a member of The Clarion‘s editorial board.

Brexit was never of the left or for the left, yet we find ourselves scrambling around to make the best of a catastrophe, instead of what should always come first – campaign for what is in the best interest of workers and social justice.

A lot of the criticism levied against the Stop Tory Brexit campaign focuses on the unscrupulous attempts by various factions on the right of the party at usurping the issue for their own political games. The attempt, however, to shut down any demand for a frank and detailed discussion on what our policy should be, given that Brexit is an issue likely to define Britain and its relationship to the world for many years, betrays a shocking lack of ambition for the Labour party that belongs to its membership.

What comrades fervently mobilising against Brexit finding its way to the priorities ballot this year blindly reject is the same greater wisdom of the membership that delivered the Corbyn leadership in the first place.

The Labour party is strongest when it is at its most democratic, and it’s most effective when it genuinely believes in what it is trying to convince the general public of. It is through the strength of left-wing conviction and desire for change among the membership that we got Jeremy Corbyn elected not once but twice, so why are we so adamant to dismiss a genuine conversation among members now?

Instead of taking several pages of the right’s book and enthusiastically applying them in turn (triangulation, electoral strategy over principles, shutting down debate, vague decision-making structures, I could continue), conference this year gives us the chance to intervene at a crucial time for the country, and for Europe. We can take advantage of the predominant support among Labour members, supporters and voters for an anti-Brexit position and use that as a platform to offer a narrative that breaks away with the status quo completely.

Instead of preparing for a general election after the success of which Labour under Jeremy Corbyn will be in charge of introducing more border controls, for example, we could go to the public campaigning for a common-goal socialist vision where it’s the workers of Europe, and the world, that set the world and Labour will be their champion nationally and internationally. We could take a general election campaign with a vote on the deal promise to the level of the Scottish referendum and expose the shambles of the first vote, by genuinely rebuilding democratic participation, discussing with people what sort of outcomes they are looking for in their communities and for the country.

We could use such a general election campaign to attack head-on the xenophobia and hate that was not caused by the referendum but that was even more viciously unleashed in its aftermath. By presenting a convincing case for a socialist Britain leading the way for other European countries, we could start addressing in practical terms the global capitalist networks that oppress UK workers as much as their fellows across the continent and make inroads for collective pan-European organising, the likes of which we saw successfully win against TTIP , and which inspired hundreds of thousands to get involved with the Paris climate change talks for example.

A Labour Party on a campaign footing, with its increased membership, its young activist base and most importantly its principles held high needn’t worry about merely trying to preserve to the best of its abilities some remnants of an arrangement it had with the EU previously.

A Labour Party with such a vision and such a campaign will drown out the hollow ‘single market at all costs’ and ‘controls on immigration’ voices and instead put forward a case for rebuilding Europe and standing united against the far right.

In nearly every opinion poll in the past year, more Brits declared a preference for Britain remaining in the EU than leaving. 73% of respondents, including most Leave voters, believe Brexit is“going badly.”

Calls for a people’s vote on the Brexit deal, with an option to remain, are getting louder. Momentum-affiliated union TSSA has decided to campaign for a new referendum, and the Left Against Brexit speaker tour has been launched to make a left case for staying in the EU.

Much of the left is reluctant to join these calls. Some are afraid to be seen as undermining Corbyn – leading to a bizarre situation where people who have long championed Labour Party democracy dodge debate and demand passive loyalty. Others rightly point out the democratic deficit and neoliberal policies of the EU – as if the same wasn’t true about the British state. In terms of welfare spending or workers’ rights, the UK is hardly a shining red star on the map of Europe, quite the opposite. Single market rules will not be the first barrier a Corbyn government faces in implementing even mild social democratic reforms. It will be the ruling class at home.

These are challenges that Labour will have to face if and when it gets into power, and will need a militant and democratic movement holding it to account to make sure it doesn’t capitulate at the first obstacle.But what we face right now is a Tory government at the negotiating table, prioritising curbing migrants’ rights over protecting jobs and the living standards of ordinary people, ready to tie us in much more damaging trade deals and attack what workers’rights and environmental protections we have left under the excuse of cutting “red tape.”

The vote for Brexit was a vote against the status quo, a desperate response to stagnating wages and overstretched public services which the Leave campaign blamed on migration.Now,with the government pushing for a disastrous hard Brexit, the campaign to remain cannot be left to neoliberals who will happily throw working people and migrants under the bus as long as the interests of business are protected.

The left cannot indulge in the fantasy that the problems of global capitalism can be solved by isolationism, more borders and barbed wire. Only socialists can make a convincing case against Brexit while offering real solutions to the concerns of the majority.

We have no time to waste. We should build the Left Against Brexit initiative nationally and locally.