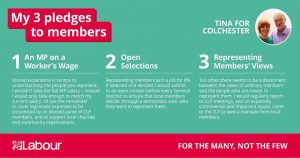 Tina McKay, who was selected as the Labour candidate for Colchester in May, spoke to The Clarion.

I only really became involved in politics in an official sense when I joined the party in 2015 – the day after the general election defeat. I stayed up all night and felt as if my heart and soul had been ripped out. I thought the only way to make a difference was to stand up and be heard. Before that I was more of an activist, which I guess is what a lot of people who’ve now joined Labour say. Before 2015 it was harder to see much distinction between the parties or what you could do to change that. Then with the leadership election I got drawn in at speed.

I moved to Colchester in 2016, but threw myself straight into the local party. Before that I was involved in Catterick, in North Yorkshire, where we revitalised the branches and build a really vibrant centre for activism in a Tory stronghold. I didn’t necessarily expect to get selected this year but in the end I was top out of five candidates.

You’ve made some very distinctive pledges about how you’ll operate if you’re elected to Parliament. Can you explain?

I’ve pledged to only take a worker’s wage, to submit myself to open reselection for every election and to always report to and consult my CLP.

For me it comes back to people not being able to identify with politicians. So many people in politics come from privileged backgrounds. There are very few working-class politicians in any party, even Labour, though we are better than the others. Politicians don’t understand the challenges people face on a day-to-day basis. I want to show that I am serious about doing things differently. If you want to represent people your life needs to be at least partly representative of theirs. It’s very easy for Labour MPs to go and sit in Westminster and become so disconnected from the people they are supposed to be fighting for. I want to represent working people, and that means living like a working person – which is why I’ve said I’ll take only my current salary, and use the rest to support local campaigns and community groups.

In terms of the argument that MPs have to work hard, so do nurses and firefighters and people in Argos stores. Everyone should be on a much higher wage but at the moment they’re not and Labour MPs need to reflect that.

Why do you think that stance is not more widespread, even on the left?

Well to be fair there are probably MPs who do this in an more informal way, but I wanted to spell it out as a clear pledge that members can hold me to and that we can campaign around. Why isn’t it more common? I don’t know if candidates come under pressure not to do it. I’m not trying to shame anyone but I do think it’s the right thing to do and I do hope others will follow.

I’d also wanted to flag up the cost for an individual of running for Parliament. There’s research just come out that suggests the average amount an individual pays to win in a marginal for Labour is £19,000. To say nothing of the pressure it creates on your personal life and so on. Obviously individuals need to be committed and not doing it for the money, but why doesn’t the party pay for all candidates to go on the minimum wage so we can combine full time? That would open it up to a wider range of people too.

And your other pledges?

I’m committed to open selections – I know it may come up at conference, but I can’t see why that isn’t the policy already. Why would you stand in an election with the Labour rosette if you don’t have the confidence of your CLP? Yes, you represent your constituents but you’re doing it under the Labour banner and having that support is essential to your legitimacy. If I win the next election and then my members decide to put someone else forward, that’s fine – it’s about the movement and what we can do for people in Colchester, not about the individual getting elected.

Similarly with reporting back and consulting the CLP – it seems absolutely obvious. The members are the heart and soul of the party, the people who make it a living force. There are so many issues where MPs have ignored members’ views and members have understandably been very unhappy about it. I can put forward my views and explain them, and we can have discussion and try to work out something everyone agrees on.

What’s Colchester like as a place for a left-wing campaign?

I’ve moved about a lot and it’s the same everywhere you go – people respond to a variety of things and there are similar issues all over. It’s the basic things, housing, welfare, schools, the NHS. We are working hard here to get our message across to as many different people as possible and we’re meeting huge numbers of people who say, yes, absolutely, that would make my life a lot better.

The Tories have the advantage that they are promoted by pretty much every media outlet as the party of the forces [Colchester has an army base]. I disagree – look at the issues of welfare and rights for soldiers. Armed forces personnel need good conditions, decent pay, decent housing and workers’ rights just like every other public servant, just like every other worker. Even in the armed forces there is a vast amount of privatisation, of housing, support services and so on. Plus of course people have families and friends and are part of the wider community and affected by the same issues of austerity and living standards as everyone else. We want military personnel integrated into the community, not shut off from it.

Conversations are a two way thing and we are working hard to get our message across but also listening to people.

What Labour policies would you like to see changed or developed further?

On those basic issues, housing, education, health, we have some really strong policies, which is why the manifesto really resonated with people – but for sure they could be strengthened further. For instance I’m completely against academies, the debate isn’t over and we need to get rid of them. We need a very different education system, at the moment the curriculum is far too rigid and teachers are not allowed to express their passion for what they teach and children are not given the opportunity to develop. We’ve got exam factories, which teach to the test.

Beyond that the main thing I’d want to focus on is unionisation. We need a program about the importance of being in a union, which is not just about pay but about so many issues that affect workers. In Colchester we’ve got a mass of low paid jobs and trade unions are not that strong, so I’m looking forward to working with the unions to turn that around. I also think we need policies that can address the issues of small business owners.

Beyond immediate policies, what kind of society would you like to see?

I’m a socialist. I don’t believe in utopias, but I do believe that we can have a society where the people who work to create the wealth share it out collectively, so that things can be radically more fair and equal. To start with we must attack the huge disparity between rich and poor, which Jeremy Corbyn’s policies have begun to do and which is why they have got such a great reception. We’ve started to show that things can be done differently.