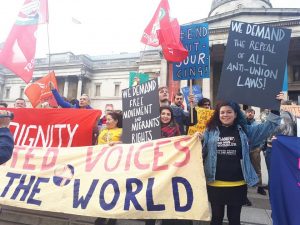 At last year’s Labour Party conference, the motion on repealing (all) the anti-trade union laws promoted by The Clarion was passed. Since then we have been campaigning for Labour to put it into action. As part of that campaigning, we are holding a fringe meeting at this year’s conference, with speakers including Fire Brigades Union general secretary Matt Wrack. See below for more about the content and purpose of the meeting.

The 2016 Trade Union Act was the latest in a long line of laws introduced since 1980 to undermine the power and organising ability of unions and make most forms of workers’ action illegal.

These laws have played a central role in weakening the trade union movement and keeping it weak. They hamper our ability to fight now – look at the recent PCS ballot on pay – and if they remain will play an even more dangerous role in bigger struggles in the future, including potentially political struggles under a Corbyn government.

The 2015 and 2017 Labour conferences voted for clear policy to repeal all the anti-union laws, and replace them with positive legal workers’ rights, including a strong right to strike. We need to ensure Labour actively campaigns for this and includes it in the next manifesto. For 13 years the last Labour government kept all the anti-union laws on the statute book – we must not repeat this experience.

Come and join the discussion on how we can put Labour’s conference policy into action and the significance of this campaign is for the future of our movement.