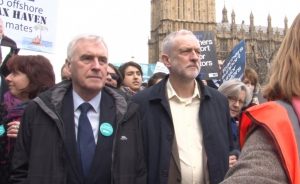 John McDonnell’s speech to the TUC on workers’ rights (later today) comes in the context of new figures showing falling unemployment and rising real earnings. But higher employment does not automatically mean better conditions and rights for workers; and the marginal increase in real wages comes after a decade of the most severe fall since records began. A strong Labour intervention for workers’ rights is badly needed.

Judging by a look at the text of McDonnell’s speech – we will see how it changes when delivered – his commitments are welcome: on rights for all workers, from day one of a job, on tackling bogus self-employment, on how exactly to deal with zero hours contracts.

It is also welcome that the Shadow Chancellor has strongly criticised the Taylor Report, and noticeable that Blair’s and now Teresa May’s pal Matthew Taylor responded by attacking McDonnell’s proposals with straightforwardly right-wing arguments against stronger workers’ rights.

But do McDonnell’s proposals really amount, as he claims, to “the biggest extension” of workers’ rights ever delivered in Britain? That depends on a crucial question which his speech does not seem to answer clearly, and which the Labour Party in general has not answered clearly yet either. That question is about the right to strike.

Perhaps the most significant part of McDonnell’s speech is the sections on what he refers to as “enforcement”. The various proposals for stronger public enforcement mechanisms and for institutional rights for unions in the enforcement process are positive. But the most important thing is when McDonnell argues for:

“Strengthening trade union rights, because empowering people to claim their own rights in the workplace is the most effective means of enforcement.”

And adds: “the most effective way to improve the lives of working people is through trade unions and collective action”.

Yes! But this in turn begs the question of the numerous anti-union/anti-strike laws introduced over almost four decades to prevent workers from organising to fight for and enforce their rights. The right to strike and take industrial action is key.

Labour conference policy, passed unanimously in 2015 and 2017, is clear: repeal not just the 2016 Trade Union Act but “anti-union laws introduced in the 1980s and 90s” – which account for the vast bulk of anti-union legislation – and replace them with “strong rights to unionise, win recognition and collective bargaining, strike, picket and take solidarity action”. (For the full motions, see here.)

Obviously, in a fully democratic Labour Party, that would settle what the party’s policy is. But we are not there yet. What the leadership is arguing for on this is much less clear. Sometimes Corbyn and McDonnell have come close to the conference policy; at other times, unfortunately more frequent, they have merged into the right-wing Labour line of “Repeal [only?] the Trade Union Act”.

The text of McDonnell’s speech refers to “our commitment to repeal anti-trade union legislation”. That is good, a step forward from “Repeal the Trade Union Act”; but still ambiguous.

That McDonnell’s speech does not mention strikes or the right to strike is, well, striking – but unfortunately typical of the way union and Labour leaders talk.

Without scrapping all of the anti-union laws and introducing measures seeking to guarantee the right to strike, Labour’s proposals will fall far short of what, for instance, the 1906 Liberal government did under pressure from the infant Labour Party. And, of course, far short of what workers need.

To make the proposals on workers’ rights solid, consistent and dynamic, we need a clear, campaigning commitment from the party to carry out conference policy, to repeal all the anti-union laws and introduce a strong legal right to strike.

• For more on campaigning to repeal the anti-union laws, see here.