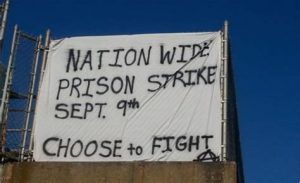 On Tuesday, August 21st, 2018 – exactly forty-seven years after the murder of radical prison organizer George Jackson – incarcerated workers in nearly twenty states began a multi-week strike across dozens of branches of prison labour. The striking workers are protesting the incredible scale and barbarity of American prison slavery, an institution that has remained legal and untouched even after the passage of the Thirteenth Amendment in 1865, which formally abolished chattel slavery and forced labour in most sectors of American society.

Developed from these roots without judicial checks, prison slavery has today become a backbone of the American penal system, and, of a population of around two million total inmates, nearly a million carry out compulsory labour. Incarcerated workers are employed in a wide variety of work in both the private and public sector, taking on jobs that range from maintenance to manufacturing to firefighting, and the average wage in many states can run as low as 33 cents an hour, with hundreds of thousands of workers earning less than five dollars a day.

Due to the inherent challenges of prison communication and further clampdowns initiated in response to the strike, it is difficult to estimate the action’s size, but a similar national prison strike in 2016 had an estimated 24,000 participants, and comparable numbers are assumed this year. There have been extensive shows of solidarity both within the United States – comprising mostly mass demos and coordinated phone zaps to local policy makers – and from around the world – including a “revolutionary salute” from imprisoned Fatah activists in Israel.

The strike is intended to last until September 20th, the anniversary of the 1971 Attica Uprising, during which over a thousand inmates in New York’s Attica Correctional Facility seized control of the prison, taking guards as hostages, and for four days negotiated substantial improvements to living conditions and legal rights in the New York prison system. Drawing on this uprising and previous prison strikes in the last decade as influences, the strike today is one of the largest industrial actions in the United States in recent memory, and as such merits extensive analysis and attention.

In general, the modern prison is an indispensable instrument of capital, and for American industry serves a twofold purpose. First, it takes as a primary role the attenuation of capitalism’s internal contradictions. Property crimes, especially grand or petty theft, exemplify this most obviously. So too do drug offenses, which account for the overwhelming plurality of prisoners – a staggering 46 percent. Demand, especially for harder drugs like heroin or crack cocaine, is kept artificially high by widespread poverty, and supply is provided by robust drug distribution networks operating in a standard capitalist model. Immigration crimes, responsible for 6 percent of the United States’ prison population, are a straightforward consequence of closed borders.

In total, material and socioeconomic conditions  – dubbed by Emma Goldman “the most poisonous germs of crime” – account explicitly for nearly three quarters of all American prisoners, and implicitly for even more. Prisons, in other words, are most fundamentally a means of suppressing the dissent and unrest that arise in response to an exploitative mode of production.

The parallel role to this, and the one filled by prison slavery today, lies in providing access to cheap and easily controllable labour. This function has a long history in the Anglo-American commercial tradition, and, indeed, American prisons today can trace their intellectual origin immediately back to workhouses first constructed in Britain in the early days of industrialization. The development of privatized, for-profit prisons – which abandon even the pretense of “reform” or “deterrence” – is the natural extension of this lineage.

In short, therefore, contemporary prisons and contemporary prison labour are an intrinsic and inextricable feature of capitalism, and effective demands for change must therefore be accompanied by a broader anti-capitalist politics that firmly resists the temptations of opportunism or reformism.

This is a quality that the strikes have cultivated with remarkable success. The ten demands listed in the official strike platform are cogent and incisive, emphasizing fair wages and better conditions for incarcerated workers, an end to racist policing laws, and political rights and financial support for current and former inmates. But the crux of the strike lies not in these demands – most of which cannot even be granted by prison authorities themselves – but instead in a broader indictment of the prison system as a whole.

As stated in a recent organizational zine, “the goal is not to hold out and win negotiations with officials, but to last those 19 days and punch the issue to the top of the political consciousness and agenda.” The flexibility of this ambition has allowed the strike to maintain a firmly radical, abolitionist character, and nearly all of its most prominent organizers – including figures like Keith “Malik” Washington and Kevin “Rashid” Johnson of the New Afrikan Black Panther Party – have a clearly revolutionary program. This property is invaluable, but atypical of most large-scale industrial actions in the United States, and its origins can be traced almost directly to the uniquely anti-bureaucratic, decentralized tendency inherent in prison organizing.

In certain respects, admittedly, the strike requires highly centralized coordination; rigid restrictions on prison communication are surmountable only by a meticulously organized framework of smuggled cellphones, reports from transferred inmates, and publications tailored to sneak past the watchful eyes of prison censors. But the strike’s outside coordinating bodies, which are led by the IWW’s incarcerated workers’ branch – known as the Incarcerated Workers’ Organizing Committee, or IWOC – play only a logistical and supportive role, and certainly not a commanding one. Indeed, the strike is, as prominent labour activist and co-founder of IWOC Brianna Peril asserts, “really a prisoner-led movement, and it has been from the start.” IWOC is there neither to dictate terms nor prescribe courses of action to prisoners; full discretion is left to the striking workers. Negotiations, when they are carried out, are carried out not by the coordinating bodies or some unaccountable union leadership but by the workers themselves, within the walls of the prison.

IWOC’s limited control is evident as well in what could reasonably be called the spontaneist bent behind the strike. It’s true that the date of the strike was fixed by the IWW in advance, and that information and organizational materials were distributed extensively by outside bodies. IWOC’s membership numbers, however, tally in the hundreds, a mere fraction of the tens of thousands of prison workers estimated to be on strike, so the vast majority of striking prisoners are un-unionized. There have even been reports from the Northwest Detention Center, a privately operated ICE facility in Tacoma, Washington, where nearly a hundred unorganized migrant detainees have gone on hunger strike in solidarity with prison labourers and in protest of immigration detention. The 1971 Attica Uprising itself, perhaps the most explicit historical and moral influence on today’s prison strikes, was an entirely unplanned and unexpected response to a routine change in scheduling.

In this vein, though IWOC and other coordinating bodies were indeed the first spark behind the strike this month, the action has taken on a life of its own, fueled by the close, cramped quarters and acutely poor conditions of incarcerated workers. Indeed, even further, the prisoners’ disorganization has proved not a hindrance but an advantage, allowing for rapid expansion of the action’s scale, unconstrained by clunky trade union machinery. As Rosa Luxemburg wrote in her analysis of the mass strike, political struggle “depends not so much upon ‘discipline’ and ‘training’ and upon the most careful possible regulation beforehand of the questions of support and cost, as upon a real revolutionary, determined class action, which will be able to win and draw into the struggle the widest circles of the unorganized workers.” So it has been with the prison strikes this month.

Taken all in all, therefore, we have a model of radical labour organization entirely independent of traditional trade union bureaucratic structures, and it is precisely by this property that the strike’s radical character has been so admirably preserved. In this regard the prison strikes should serve as a beacon of hope for the left… a beacon that provides a welcome break from the long history of trade union leadership undermining rank and file workers. Recall for instance the recent teachers’ strikes in West Virginia this spring, during which union leaders demanded a grossly premature return to the classroom, or the UCU leadership’s remarkable concessions to the UUK during the British pension disputes this past winter.

In the United States, this lesson is especially critical in light of the Janus ruling passed earlier this year, which deeply undermines the already crippled political integrity of public sector unions. Indeed, where a vast majority of workers’ class consciousness is as poorly developed as in the United States, a centralized union with unaccountable leadership can be just as bad as no union at all, and will inevitably stunt the growth of a radical working class movement. In contrast, the prison strike should be taken as an impressive testament to the power of grassroots activism, and gives a clear roadmap to the kinds of bottom-up organizational models that the left must promote.