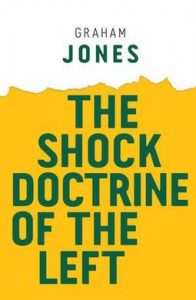 Often on the left, theory and action exist in separate spheres; we are enjoined to think or act, but rarely both simultaneously. The first I heard of Graham Jones’s The Shock Doctrine of the Left was an invitation to its Housmans Bookshop launch. The book inverts Naomi Klein’s thesis in The Shock Doctrine—which explores how neoliberals took advantage of crises to gain hegemony—and in doing so calls to mind the theory of left-accelerationism. This is supported by the fact that the two authors of Manifesto for an Accelerationist Politics, Nick Srnicek and Alex Williams, supplied a blurb to Jones’s book and conducted the interview style book launch respectively. In the text itself, Jones explicitly places himself in the accelerationist tradition, which traces its pedigree to Gilles Deleuze and Félix Guattari and encompasses a range of ideas and strategies. Here, it can best be summarised in Schumpeterian terms as ‘harnessing the creative destructive power of technology made possible by capitalism, for anti-capitalist purposes.’ At the launch, responding to a question I put to them, Jones and Williams were clear what this does not mean: i.e. exacerbating capitalism in the hopes of bringing out its contradictions to somehow spontaneously generate socialism. Rather, we are asked to harness capitalism’s contradictions, preparing to strategically seize already inevitable crises.

To unpack what is meant by such preparation, it is necessary to look at what informs Jones’s analysis: such as the opaque sounding ‘adaptive systems theory’, the human body as a metaphor for understanding larger systems and the ideas associated with chaos theory. These tools are supplemented in the writing by second person narrative interludes, full of corporeal and sensory details that ground Jones’s more abstract discussions and viscerally relate it back to the reader. Simply, The Shock Doctrine of the Left uses academic left theory to empower and direct activism more usefully. An ecology of organisations is suggested as a prerequisite for the doctrine to succeed, an ecology that can respond to crises much like the dual power of the Soviets pre-1917, the shock doctrine of Neoliberalism ahead of the 1980s and the Muslim Brotherhood’s readiness in the lead up to the Arab Spring. In this, Jones shows how different ideologies have historically set up structures to take advantage of the political vacuums they anticipated or brought about. One could even add the monastic orders established by the Rule of Saint Benedict to his list of bodies that seized power by anticipating, and then fulfilling, a society’s unmet needs.

While acknowledging the dangers of incremental reformism and the totalising shocks of a wholesale revolution, Jones explores the possibilities of coordinated, controlled shocks, such as the disempowerment of the state in a particular arena that thereby empowers activists. Such shocks create chaos and he contends that ‘we need chaos for the dynamic element that creates the life of an adaptive body; but if there is too much, nothing holds together, and everything is disempowered.’ Because of the emphasis on bodies as organic things prone to entropy, much of the analysis remains the same whether applied to activism or electoral politics. With activism, there is a stress on the importance of creating robust bodies that can endure over time as well as respond spontaneously. For electoral politics, however, the danger is the opposite: the need to avoid becoming stagnantly hermetic.

The eventual goal of anyone with a left-accelerationist agenda is to seize power for the ends of socialist policies. But Jones issues a caveat to those on the left in Britain (and elsewhere) who wish to take parliamentary routes to socialism. He asserts that, ‘The state must however be understood not as a neutral tool to be taken, but as an autonomous body with its own trajectory that cannot be fully controlled, one that can sweep up even the most principled of left-wing politicians.’ For the ideas in The Shock Doctrine of the Left to succeed, Jones shows how the taming the state can serve activism and activism can help to tame the state; there is a constant need, he insists, for a meta-strategy in which different approaches to achieving the left’s ends (tactics he separates into smashing, building, healing and taming) mutually reinforce one another. It’s an exciting book that condenses a lot of thought, but gives plenty of scope (in recommended reading, in practical tactics) for further explorations and fresh, adaptive politics.