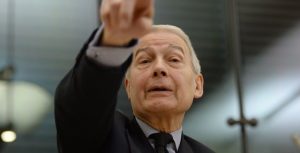 Frank Field’s right-wing politics, contempt for Labour Party members and disloyalty to the party itself have been well documented in numerous and varied places. One astonishing fact which we highlight in two extracts republished here is that his role in opposing the election of fellow Labour candidates and the fact that the right-wing party machine protected him from any consequences for this outrageous behaviour.

In particular these extracts focus on the Wallasey constituency, next door to Field’s Birkenhead seat, in the 1987 general election. Wallasey is now a very safe Labour seat, but until then it was safe Tory, except for three years with an independent MP during World War 2.

In ’87 a dynamic campaign around victimised shipyard worker and class-struggle socialist Lol Duffy came within 279 votes of winning the seat, slashing the Tory majority by 6,500. Duffy would almost certainly have been elected without the vile intervention from Frank Field described below. He was rewarded for his hard work in building the party and winning votes by being barred from restanding as the Labour candidate in 1992, while Field was deselected but then effectively reimposed as a candidate against the wishes of his local party in Birkenhead.

Labour’s candidate was Lol Duffy, a Marxist and a working-class social­ist who had been imprisoned for leading an occupation at Cammell Laird shipyard against job losses in 1984. Lol was clearly the candidate of the left, of those who wanted to resist the Tory attacks. Lol was a support­er of Socialist Organiser [forerunner of Workers’ Liberty], and this was itself made into an election issue.

Lol’s selection was greeted with derision by the local media and the hand­ful of right-wingers in the Labour Party. “Chalker will eat him for breakfast” they said. “Marxist to fight Chalker” was the headline, denouncing Lol’s sup­port for Socialist Organiser. Local right-wingers said his views would be a liability. 22,512 electors – Labour’s highest ever vote in Wallasey – proved the faint hearts wrong. What they didn’t understand was that for every one person confused by the “Marxist” tag, another 10, 20, 30 people voted for the first time for Labour because here, at last, was a candidate and a party which fought for the interests of working people…

Our campaign had concentrated on the real issues: unemployment, health, education, housing, pensions, the Tory record. We had set the agenda.

It quickly became obvious – to us and to them – that if the Tories and Alliance tried to fight us on this battleground we would have a Labour land­slide on our hands. Their response was swift and predictable: smear Labour and whip up a red scare campaign. What wasn’t predictable though was that the first blow would come from “our own” side. We had the grotesque chaos of a Labour MP – yes, a Labour MP – scuttling around newspaper offices handing out poison pen letters about our own party! [This is a parody of a famous attack by Neil Kinnock on the Militant group at Labour Party conference two years earlier.]

It was a classic example of a press stitch-up. You start with an anonymous “Wallasey resident”. The resident, we are told, has written to Frank Field, right wing Labour MP for Birkenhead, to “seek the MP’s comments on Mr Duffy”. Field writes back on 5 May to say “Thank you very much for taking the trouble to write to me. I can tell you in the most definite term that I shall not be supporting Duffy. I have refused to appear on any plat­fomrs with him and I hope Cammell Laird workers similarly will refuse to give him a hearing when he tries to gatecrash [sic – despite the fact that Lol had recently been a Cammell Lairds worker!] on our factory-gate meetings during the election campaign” The next step was for Martin Harden, the editor of the local freesheet, the Wirral Globe, and a friend of both Field and Chalker, to be given the letter and then to wait for his moment. One week into the campaign, on 21 May, he struck. “Marxist Lol slammed by Frank Field” said the front page. He reproduced the letter for all to read.

Frank Field was best known for his support for “tactical voting” and for calling for votes against left-wing Labour candidates. Field supported council house sales, opposed unilateralism and was opposed to women’s abortion rights. He treated his own constituency Labour Party with contempt. He was reselected as Labour candidate after threatening to stand as an independent. In Wallasey he was doing a job of work for Lynda Chalker, pure and simple.

The Labour Party should have demanded he state his support for Lol Duffy. Instead it stayed silent. Field was never challenged to this day by Labour leaders for his actions. Imagine if a left-winger had suggested that voters should vote against Labour candidates. They would have been drummed out of the party and Walworth Road would have imposed a differ­ent candidate. 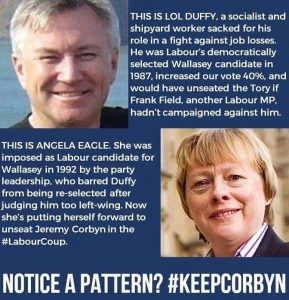 From the 2016 leadership campaign

From Richard Heffernan and Mike Marqusee’s Defeat from the Jaws of Victory: Inside Kinnock’s Labour Party (1992). For a longer extract, see here.

Frank Field, who was first elected Labour MP for Birkenhead in 1979, was always a fervent champion of his own right to say or do anything he liked. In April 1987 Field appeared on BBC television to advise voters to back the SDP-Liberal Alliance in seats where Labour came third. At the following NEC Tony Benn suggested that Field be asked to issue a statement calling on all electors to vote Labour. Kinnock replied that this was unwise because Field might refuse…. In the general election that followed, Field’s call for tactical voting was used by the Liberals against the Labour candidate in Southend West. The latter asked Field for a statement which he could use to rebut the Liberals but Field declined, saying: “I stand by what I said on tactical voting and I don’t issue statements of support for anyone”.

At around the same time Field was denouncing the Labour candidate in the neighbouring Wallasey constituency, left-winger Lol Duffy, in the press. Although he had never met Duffy, Field wrote in a private letter that was widely circulated in the area, “I can tell you in the most definite terms that I will not be supporting Duffy. I have refused to appear on any platform with him and I hope that Cammell Laird workers similarly refuse to give him a hearing when he tries to gatecrash on our factory gate meetings during the election campaign.” This letter, written on May 5th, was published on the front page of the Wirral Globe, a local paper, on May 21st under the heading “Marxist Lol slammed by Field”.

The Wallasey CLP ran a vigorous local campaign and Duffy succeeded in cutting Tory MP Lynda Chalker’s majority from 7,000 to 279 votes. Without Field’s intervention, Duffy would probably have won the seat. The MP’s treachery angered local Labour Party members, many of whom were already alienated by his aloof and dismissive attitude towards his Birkenhead Party members. Field’s views on such issues as training and taxation were not in keeping with the views of most Party members or indeed with Kinnock’s own Policy Review. He had strongly opposed the workers’ occupation of the Cammell Laird shipyard and was hostile to trade union activity. In the Commons he was a right-wing maverick, earning plaudits from Tories and the media but annoying many Labour MPs.