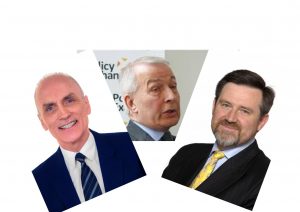 Another month, another huffy departure. Readers will be heart-broken to learn that Frank Field, of blessed memory, has resigned the Labour whip. The Member for Birkenhead says his decision was prompted by anti-semitism in the party, as well as by a culture of bullying. His resignation brings to a close an eventful Labour career which included saving Theresa May from a parliamentary defeat on Brexit, advising David Cameron on welfare reform and calling on the people of Wallasey to allow a Tory victory rather than back a socialist Labour candidate in 1987.

Field has voted solidly with the Tories on Europe in the hope that Brexit will help keep out immigrants, who he blames for the strains on housing and public services. His willingness to pin our social ills on foreigners earned him the moniker of ‘the new Enoch Powell’ from the then-Bishop of Worcester, a nicknaming that’s interesting for at least two reasons. Firstly, and as a rule of thumb, if you’re being outflanked on the left by the Church of England then something may have gone wrong with your socialism. Secondly, one can only assume Field took the bishop’s Powell comparison as a compliment, since he’d lavishly praised the old racist in the pages of the Spectator.

Still, I’m sure concerns about anti-semitism and Labour ‘appearing racist’ were Field’s primary concern in resigning. Only a cynic might think it had anything to do with the fact Birkenhead CLP were about to deselect him.

*
Some times people have the best of intentions, but end up saying terrible things. For example, there was a legendary occasion in my family history when, during the Fifties, my great uncle introduced his new German girlfriend to his mother. World War Two not being long concluded, there was an obvious unspoken tension in the air. In a calamitous bid to break the awkward silence, his mother eventually asked the poor girl: ‘So… did you ever get to meet Hitler then?’

This tale springs to mind whenever I see Chris Williamson MP holding forth on international politics. Williamson is on left of the party and I briefly met him when he came to speak at my local Momentum meeting. For what it’s worth, I think his intentions are good, and his motivation is presumably to be a tribune for socialism. Unfortunately, much of the common sense of the contemporary left is so utterly confused on international politics that he’s ended up spouting awful nonsense in defense of poisonous dictatorships. His latest foray was to praise Vanessa Beeley, a pro-Assad ‘online journalist’ and conspiracy theorist who writes uncritical propaganda for the murderous Syrian state. Presumably Williamson thinks that by promoting the Syrian regime and its apologists, he is in some way being a good anti-imperialist. Instead, he’s whitewashing a regime that gasses civilians, and promoting a woman who accused the White Helmet humanitarian volunteers of being Al-Qa’eda operatives.

At least my great-grandma only mentioned a tyrant – she didn’t go the whole hog and end up shilling for him.

Williamson is currently touring local Labour Parties on what he’s calling a ‘Democracy Roadshow’. Let’s hope his concept of democracy is different from Bashar al-Assad’s, else who knows which CLP will be barrel-bombed into submission next.

Much like an enterprising cat inveigling its way into the home of whichever sap will feed him, Barry Gardiner has quietly morphed from a run-of-the-mill Blairite into a spokesman for the Corbyn leadership. Despite showing no inclination to leftism in his first two decades in parliament – to say nothing of his rather questionable relationship with India’s Hindu right – Gardiner is increasingly the leadership’s advocate of choice on TV and radio. To be fair to the Leaders’ Office, it must be difficult to pick a safe pair of media-friendly hands when most of the Parliamentary Party fall into one of two unusable categories: a) hostile right-wingers or b) Chris Williamson.

Gardiner caused a stir when he snubbed the idea of a second referendum on Brexit, claiming that a vote on the deal would provide ‘succour to the extreme right’. To avoid this, we should let Brexit happen. This is a strange argument, since it seems the thing that’s giving most ‘succour’ to the extreme right is Brexit itself. According to the Gardiner school of anti-fascism, the best way to avoid giving the racists a victory is to let their main policy goal go through unopposed. One hopes he doesn’t take the same attitude to the Tories at election time – “the public voted for the Tories as biggest party in 2017, overturning that now would only rile them up.” Gardiner rounded off his argument against a second referendum with the following flourish, a statement that is so ironic as an argument against a vote being held that I really doubt you need me to draw any comic conclusions for you: “People want to be able to achieve change through democratic means. If they feel that is being denied to them, they then turn to other more socially disruptive means of expressing their views.” Indeed, Barry, indeed.