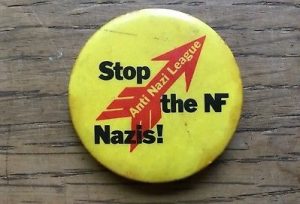 In August John McDonnell made an interesting intervention into the debate about challenging the far right, saying: “We can no longer ignore the rise of far-right politics in our society,” and concluding that, “it’s time for an Anti-Nazi League-type cultural and political campaign to resist”.

McDonnell is right to be concerned. He’s right also that the Labour and trade union leaderships should make an initiative. But we can learn a lot from the mistakes the ANL made in the past, and look to avoid them in the future.

To set the context, I want to make some observations and draw some conclusions from the most recent London counter-protest against a Free Tommy Robinson rally.

The two anti-Robinson marches, combined, were outnumbered by the right-wing mobilisation. The Unite Against Fascism marchers probably had an average age of over 50 and they were overwhelmingly middle class. The march was not stewarded. The Antifa march was younger and had a (purely verbal) stated intention of physically stopping the right

I would suggest that the Socialist Workers Party, who run UAF, are in a bad way and are now incapable of putting large numbers onto the streets (and if they were able to do so would lead us in the wrong direction).

The Robinson rally was much more working-class than our protest. The majority of the right-wingers were not actually fascists – although they might well become so as fascist groups were in amongst the crowds, recruiting. If the hundred right-wingers – football hooligans, I guess – who attempted to attack the back of our march, on the corner of Parliament Square, had not been stopped by the police they would have routed and scattered the anti-right protest.

After the march RMT activists in one pub, then Lambeth Unison people in a second pub, were attacked by right-wing thugs. We should expect more attacks on left activists and paper sellers.

Meanwhile the unions are asleep. The RMT was the only union with a (small) organised delegation. The General Secretary of my union, Kevin Courtney from the NEU, spoke but did not mobilise even small numbers of the union’s membership. The unions continue to think they can fight fascism by affiliating to SWP fronts; they continue to out-source fighting the right. There was virtually no Labour Party presence on the anti-Robinson march.

Very few of the hundred union leaders, MPs, and showbiz types who had signed an Open Letter to the Guardian calling for a counter-protest turned up themselves. We can’t trust union bureaucrats, film stars and pop groups to fight fascism and racism; we can only trust the working-class movement.

In future, minimally to ensure our own safety, anti-right mobilisations should be coordinated by the trade union movement, and trade unions should carefully steward their own delegations. The unions and Corbyn should call people out onto the streets to oppose the racist right.

So, how would a new ANL type organisation meet these problems?

The ANL was first founded in 1977 and existed as an effective organisation for just three or four years. A second version, in 1992, was much weaker and more obviously an SWP-front group.

The original ANL was a much broader affair, albeit one still controlled by the SWP. For a while the SWP was big enough to enlist the support of many of the local anti-racist/fascist groups that had sprung up across the country in response to widespread overt racism in British society in the 1970s, and the serious threat of the fascist National Front.

The original ANL organised a series of carnivals, including two massive events in 1978. In October 1978 the SWP/ANL disgraced itself by holding a carnival in Brockwell Park, Brixton, while the NF marched against the Bengali community in Brick Lane, East London. Faced with a choice between mass opposition, on the streets, to oppose fascist violence, and the chance to recruit at an ANL carnival, the SWP went ahead with the event. Many on the far left went to Brick Lane and stood side-by-side with the Asian youth.

That illustrates the basic political problem with the ANL. In practice it was very conservative and right wing. One leading ANL/SWPer even boasted that if Winston Churchill had been alive he would have been welcome in the ANL. It is difficult to imagine cramming more political errors into a single sentence.

The SWP openly encouraged Liberal and Tory politicians to back the ANL – and obviously to keep the alliance together they had to tone down any radical solutions that were required to meet the fascist threat. All propaganda was reduced to a lowest-common denominator: everyone against the fascists.

The ANL Mark II again highlights the problem with the SWP/ANL’s version of anti-fascist politics. In September 1993 the British National Party (BNP) fascist, Derek Beackon, was elected in a council by-election in Millwall ward, on the Isle of Dogs, East London. Beackon was the first fascist councillor elected in Britain since 1976.

Beackon didn’t last long as he was beaten by Labour, in the Council elections of 1994. Labour candidates were running on a specially-constructed, more-left-wing manifesto pledging a large number of new council homes.

I remember turning up in Millwall, to campaign for Labour – it was an obvious thing to do to defeat Beackon – and large numbers of anti-fascists and Labour members did the same, from all over London. The SWP/ANL turned up to meet our group of Labour canvassers, handed out an ANL leaflet saying, “Don’t Vote Nazi”, then went away again. In other words: vote anyone but the BNP! Vote Tory – just don’t vote BNP! And the SWP/ANL certainly was not going to get involved in anything as effective as canvassing for Labour!

The ANL/SWP brand of liberal, gimmick-led, PR anti-fascism is not what is needed against serious fascist threats. We need properly-stewarded, labour movement mobilisations to confront fascists on the streets, and a radical left-wing Labour Party that guarantees jobs and homes for all workers, which would help cut the roots of pseudo-radical populist and fascist right-wingers.

John McDonnell is right about the urgent need to debate the issue, but I hope he isn’t in a meeting right now discussing with the SWP how he might help them form an ANL Mark III. We can do better than that, and McDonnell should discuss with the union leaders about a united labour movement response to the new threat from the far right. We need that discussion throughout the labour movement too.