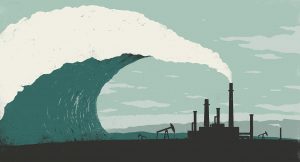 Particularly in the teeth of Brexit, there is a danger that the labour movement, including the upcoming Labour Party conference, is failing to discuss an even more pressing issue facing all of us – climate change. Luke Neal, a Clarion supporter who is active in a range of climate change and ecological struggles, argues we need to push back to get this issue up the agenda, figuratively and literally.

We have just come to the end of one of the hottest summers in living memory. But it was no anomaly. There is a clear and growing body of evidence of rising temperatures across the world.

Resulting from these undeniable signs of capitalist-driven climate change, there is increasing discussion in the scientific community about the danger of a ‘hothouse earth’ scenario (see here) This is where a number of tipping points are in danger of amplifying the greenhouse effect further, and quicker – for example the melting of Siberian permafrost which stores huge amounts of methane, CH4, (which is 20 times more powerful at the greenhouse effect); the acidification and warming of the ocean, inhibiting its capacity to absorb carbon; a similar effect in the soil, transforming it from a carbon store to an emitter. A number of other factors identified in the August 6 Proceedings of the National Academy of Sciences paper on the danger of the ‘hothouse earth’, such as the loss of the Amazon, could be accelerated and triggered within a short period of time unless emissions are dramatically reduced.

Politically, it is only the socialist movement that can take the measures necessary to minimise the coming storm. International agreements have been a monumental failure: since the first UN Intergovernmental Panel on Climate Change (IPCC) report in 1990, CO2 emissions have risen by 60%; since the foundation of the IPCC in 1988, more than half of those emissions were made by just 25 corporate and state-owned entities, and over 70% were produced by the top 100 companies. As many emissions were produced between the first IPCC report and 2016 as there were from 1751 to the publication of the report.

The COP21 in Paris in 2015 committed to holding the increase in the global average temperature to well below 2°C, which would require vast decarbonisation by 2030. The agreement made no commitments about how this should be achieved, other than reassurances of flexibility and a restatement of faith in the emissions trading schemes—whose achievements to date in terms of reductions are negligible, if not negative–and wide adoption Carbon Capture and Storage technologies which are largely untested on such a scale and remain surrounded by scientific controversy. Indeed scientists have estimated that even if all the pledges of the Paris treaty are kept, global temperatures will rise to 2.7°C above pre-industrial levels. And since then, Trump has pulled the US out of the treaty.

There is currently much excitement over signs that signs that things may be beginning to shift in favour of renewable power. Renewable generation rose by 9% in 2016 and was source of just over half the new capacity added worldwide. As demand for renewables is rising, production costs fall, as seen in the decline in the cost of wind turbines by a third and solar panels by 80% since 2009. However this is but a glimpse of the bigger picture. Wind and solar power accounted for just 4.4% of global electricity in 2015. The real expansion of fossil fuel generation continues faster than that of renewables, even while the installation costs of renewable energy are cheapening in relative terms. The expansion in total energy consumption in 2015 and 2016 – which is of course predominantly fossil fuels – equalled the total 2016 renewable energy production. The expansion in fossil fuel production alone in the last 4 years is greater than the total 2016 wind and solar production. This means that while wind and solar are added energy to the total consumption pool, they are not really replacing any fossil fuels.

The UK mirrors this picture. As renewable capacity rises, there are new natural gas power facilities being planned, alongside Tory backed fracking projects to provide some of the fuel. Drax power station in North Yorkshire is proposing the largest ever UK gas units, and for huge government subsidies to finance it. In its own environmental impacts report on the project, Drax confesses that it will “represent a significant net increase in greenhouse gas emissions and have therefore negative climate impacts”. This project, and another new gas-fired power station in nearby Eggborough, is likely to increase our reliance on Russian-imported as well as unconventionally drilled (e.g. fracked) gas sources.

To this urgent backdrop, what should the Labour Party advocate? We have an historic and pressing responsibility to go further than the support for community renewables, part nationalisation proposed in the 2017 manifesto. As Will Steffen et al state in their paper of 6 August:

“Incremental linear changes to the present socioeconomic system are not enough to stabilize the Earth System. Widespread, rapid, and fundamental transformations will likely be required to reduce the risk of crossing the threshold and locking in the Hothouse Earth pathway”.

Our motion for Labour conference raises some policies with this warning in mind. It draws from the tradition of workers’ plans, from the Lucas Plan to the 1 million climate jobs pamphlet produced by the Campaign Against Climate Change trade union group just under a decade ago. We propose it as a serious policy perspective for Labour in power, as well as means to open up further discussion on climate change in the labour movement. There are important considerations it does not address (due to word limit for motions), but which we hope will be taken up by activists of the Labour left. High on this list should be the debate over degrowth/a sustainable economy, and, crucially, the need for us to prepare positively for millions of climate-related migrants (not through increased border security but through house building and decent social provision).

• See here for all our model motions for submission to Labour Party conference.