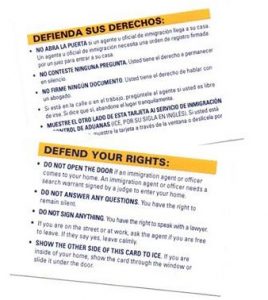 On a recent trip to the States, Hannah Webb spoke with Alex Moore, Communications Director at Joint Council 16 of the International Brotherhood of Teamsters.

Teamsters Joint Council 16 declared itself a sanctuary union in September 2017, what does that mean in practice?

It means that we are trying to do a lot more than we used to to proactively protect our members from immigration enforcement, doing ‘Know Your Rights’ training and education materials so that our members, if they’re stopped by immigration officers on the street or in their homes, or if they come to their work, have a game-plan and know what to do so they have the best chance of not being detained. So that they understand they are protected by constitutional rights to not self-incriminate, and to refuse searches. In February we had a training for staff from various local Teamster unions around the city to go through all that material, and that was a 30 hour training, so that they would have that information to be able to go back to their members, talk to their membership in the shop about how to be prepared for those situations and what their rights were. We also produced a two page summary of that stuff, and a card that someone could carry in their wallet or purse – on one side is instructions for the member for what to do in this situation, and on the back side is a message for the officer, as if you had a lawyer there. Most people, I probably would be too freaked out to say all the right things in that moment. Or if the officer comes to your house, you can hold it up to the window, or push it under the door as your response.

Most of the way the labour movement works in the US is once a workplace is unionised, usually every three years, you’ll bargain a contract between the union and the employer that govern the conditions of work, and you can put pretty much anything in that contract, so we are working to develop language that our locals can negotiate into their contracts which say what the employer is required to do if ICE (immigration officers) come into the workplace to try to do a raid. Under US law you don’t have to let police into your private property if they don’t have a warrant signed by a judge, so we don’t want our employers to voluntarily let them in, so we have a contract that prohibits that. Language that if there’s an audit by the federal government of one of the places where our members work, wanting the company to exercise its full rights to… this is pretty technical but basically extensions of deadlines, and we want them to take full advantage of all of those, so our members are protected.

We also want to prevent the employer from doing more than they’re required to by the law, so, when you’re hired for a job the employers in the US are required to verify that you’re authorised to work by getting a social security card or something that shows that, and under federal law after that you’re good; so we don’t want our employers to then be asking people for information every year for example – we just want them to do what they are required to do by law, and no more.

There’s also things like, if one of our members needs time off from work for a citizenship hearing, or if they can’t work anymore for some kind of immigration reason but maybe could come back in a month, we want them to be protected in those situations, so they don’t lose their job or their seniority.

Also, we want to be doing everything to provide legal representation and campaign support if any of our members are detained, or facing deportation. It’s kind of what sparked the whole project, is one of our members was deported last year, and we had been campaigning for him to be released. We promised to do that in the future for other members in that situation, but also we want to do these other things, to hopefully prevent more of them from ever being in that situation.

Maybe three or four years ago, the city [New York local government] started providing free attorneys for low income immigrants who are facing deportation proceedings, or other immigration proceedings; people who have been detained. I think what I read in the New York Times is that the defendant lost 95% of the time, and once the city started providing free attorneys, the defendant lost about half the time.

How common is being a sanctuary union, or these measures that you’re putting in place, and how much support is there from the AFL-CIO?

One key thing is we’re definitely not the first to do any of this stuff. There’s unions that have been taking really proactive measures to protect immigrant members for many years – the Hotel Workers’ Union and the United Food and Commercial Workers’ Union have both done a lot on this. There was a workplace raid in a meatpacking or chicken processing plant, I want to say in Kentucky or Tennessee, recently, and the RWDSU [Retail, Wholesale and Department Store Union], they are providing lawyers for all those workers. The AFL-CIO has done a really good job in bringing lots of unions together around it – there’s a working group of people from all the various unions who have been meeting and talking about what they can be doing. I went to the training by the AFL-CIO a year or year and a half ago around a lot of the stuff we’re now doing as a sanctuary union, and of course we’re also an affiliate of the International Brotherhood of Teamsters who have also been helping us and supporting us with legal expertise, and other support. Thirty years ago you probably would have heard more unions saying that immigrants are a threat to American workers – that’s a pretty rare thing to hear from a union anymore. You’re probably not going to hear many unions saying “We should have open borders”, but the labour movement on the whole is pretty, at least, pro-immigrants who are here, and not wanting draconian enforcement of more who are coming.

In addition to it being inherently good work to be doing, I think a reason it’s important that unions do this, and unions like the Teamsters do it – I don’t know if this is the stereotype you get in the UK, but I think a lot of people in the US think of the teamsters as white, older men; like your typical Trump voters, and I think there’s definitely a perception that “oh, all those Teamsters, they voted for Trump” and even though that’s not true, I think it’s important that we show what side we’re on, and be proudly in favour of sanctuary unions, and on the side of immigrants, because that undercuts the White House’s ability to say they’re doing this for workers, and this is something workers want. It’s not what workers want, and I think we’re helping to undercut that talking point.

There’s recently been calls for the abolition of ICE [Immigration and Customs Enforcement]. How widespread are those calls within the union movement, and more generally? How big could it get, and what sort of power does that demand have?

It’s a good question, I don’t know, is the short answer. I think that’s a growing demand on the left and labour is a key piece of the left, even if labour exists on a pretty broad spectrum of political positions. I’m not sure whether or not any unions have called for the abolition of ICE or not, maybe some have.

What does the recent US Supreme Court case of Janus v. American Federation of State, County, and Municipal Employees judgement mean for the health and future of this union and trade unions in the USA generally?

The Supreme Court found that bargaining a union contract around raises and protections for workers is basically first amendment protected free speech, or it is speech, and then to require people to pay unions to engage in that speech is a violation of those peoples’ first amendment free speech rights. It’s a surreal, bizarre ruling; to have someone who’s negotiating thousands of dollars of raises for you, to pay your fair share of that being a free speech violation is kind of crazy.

It was already the law based on a Supreme Court ruling 30 years ago – Abood v. Detroit Board of Education [1977] – they already couldn’t be required to pay for actual political speech, so when unions are out campaigning for candidates or doing mailings to their members about who they endorsed, you already couldn’t require your members pay for that, and this is going further saying you can’t require them to pay for any of the other stuff, because all that is inherently political speech too.

What it means is that unions have to get all of the workers who they represent to proactively say that they want to be members and want to pay dues. Obviously you’re never going to get it to 100% so there’s going to be some degree of financial hit there. I think most people understand that this isn’t about free speech, this is about attacking unions, and most workers understand that they’re happy that they’re in a union, they’re proud to be in a union, and they will keep paying dues. It’s on the union leadership and membership to organise and build even more solidarity within our unions and within our shops. In a lot of the country this is already basically the status quo for private sector unions, in a lot of the country workers aren’t even allowed to have a union in the public sector, and there still are really strong unions where workers cannot be required to contribute a fair-share fee or pay dues, and you just have to do it through militant organising and solidarity, which isn’t necessarily a bad thing. 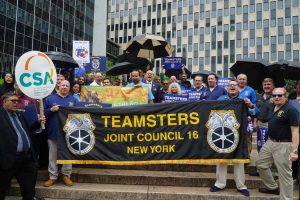