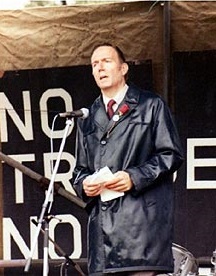 “Albert Booth was an inspiration. He proved it was possible to be elected as a socialist, opposed to nuclear weapons, in the heartland of the shipyards that built Trident. He stands as an object lesson for those who today believe that Labour is only electable on the politics of the middle ground.” – Jeremy Corbyn

For many years the Cumbrian town of Barrow-in-Furness has had right-wing, even hard right Labour MPs – John Woodcock, who has just resigned from the Labour Party, and before that Woodcock’s mentor, John Hutton, “Baron Hutton of Furness”, who helped the Tories slash public sector pensions.

Before that, however, the town had a left-wing MP who was also against nuclear weapons – despite his constituency’s central role in the production of nuclear submarines. Albert Booth, trade unionist, socialist and Barrow’s MP from 1966 to 1983, was also my uncle. (The picture above shows him at anti-Trident/Cruise rally in Barrow Park, in 1983.)

Born in 1928 into a working-class family, Albert left school at 13, studied evening classes with a grant from the Co-op and then became a draftsman and active trade unionist, in a union which is now part of Unite.

He joined the Labour Party as an extension of his trade unionism, was a national council member of the Labour League of Youth, secretary of his constituency party at the age of 24, and was a Labour election agent in 1951 and 1955. He was a Tynemouth borough councillor from 1962 to 1965, and chaired the local Trades Council.

Having previously put up a decent show in losing a safe Tory seat, Albert was elected Labour MP for Barrow-in-Furness in 1966. As an MP, he was active in the soft-left Tribune Group, then rather more influential than now. His closest political ally, in many ways his mentor, was Michael Foot.

When Labour kicked out the Tories in 1974, Foot became Secretary of State for Employment and picked Albert as his minister, in what was seen as an appointment to satisfy the unions and the left. As minister, Albert drafted some important legislation, including the employment sections of the Race Discrimination and Sex Discrimination Acts. At last, it became illegal to sack a worker for being black, or to pay a worker less for being female.

He also drafted the Employment Protection Act, which created ACAS and enshrined in law that the state favoured collective bargaining, ie that employers should negotiate workers’ pay and conditions with their trade unions. This clause would later be repealed by Thatcher, and has not been restored by New Labour, a fact for which former Labour Party General Secretary Jim Mortimer roundly castigated the government at Albert’s funeral.

When Harold Wilson resigned as Prime Minister in 1976, Foot became leader of the House of Commons and Albert succeeded him as employment secretary. The legislative highlight was probably the 1977 health and safety reps’ regulations, still in use and set out in the “Brown Book”. It forced employers to recognise union-selected health and safety representatives and to afford them various important rights, for example, to carry out workplace inspections.

However, that Labour Government badly let down working-class people, falling out with the unions, attacking jobs and public services, lashing up with the Liberals, and signing a woeful deal with the International Monetary Fund. It ended in the “winter of discontent’”, and its unpopularity opened the door for Thatcher’s Tories. Albert argued against some of this in Cabinet, but supported the leadership’s line outside, earning criticism from the left.

Socialists said that never again should there be a Labour government like that one — although obviously subsequent ones have been even worse!

When Labour lost the 1979 election, Albert became transport spokesperson, and hired a young Peter Mandelson as his researcher, his first job at Westminster. In his last years, Albert described this to me with a sad smile as the worst mistake he ever made.

Albert lost his seat in the 1983 general election, with the Labour vote in his constituency as in many others split by the SDP. An additional reason was that he refused to compromise his commitment to unilateral nuclear disarmament, at a time when this was a dividing line between Labour’s left and right, and when the new nuclear submarines were to be built in his constituency. Despite Albert arranging for Foot to write to Vickers workers assuring them that Labour would defend their jobs when it scrapped nuclear weapons, the issue still both lost him the seat and provoked substantial personal grief for him and his family. His stand on this issue earned him a reputation for integrity.

A further reason for his defeat was a nasty campaign by anti-abortionists based in the local Catholic church, who preached that Catholics should not vote for Albert Booth and put up posters denouncing him as a baby killer. Albert believed that the law should not prevent women accessing abortion should they feel they needed to, and had refused to sign an anti-abortion Early Day Motion.

Albert became Labour Party treasurer in 1984, and sought election to Parliament in the Warrington South constituency in 1987. He had been offered the safe seat of a retiring Labour MP, but refused on the logical grounds that it was the Tory seats that Labour needed to win! He lost the election, but achieved one of the biggest swings to Labour in the country. He was then offered a seat in the House of Lords, but refused on the principle that as a democrat, he could not accept a seat that he had not been elected to.

Working as a transport director for South Yorkshire and then Hounslow councils, Albert remained active as a trade unionist but less so in a Labour Party he found increasingly distant from him politically.

Albert was a profoundly caring man, his socialism coming more from morality than from Marx. However, he understood that socialism would come not from earnest wishing, but from a movement, the labour movement. Albert Booth’s political life was not without mistakes, but his contribution to our movement and to the interests of the working class stands in stark contrast to his successors as Labour MPs for Barrow-in-Furness.

• For tributes to Albert Booth from Jeremy Corbyn, John McDonnell, Tony Benn and others, see here.