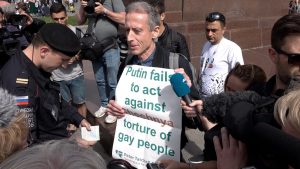 Russia is a police state where human rights, the rule of law and civil society are subservient to an increasingly autocratic president. The Russian human rights group Memorial has documented over 100 political prisoners. In apparent retaliation for its challenge to state abuses, it’s offices have been attacked. There is pervasive censorship. All the news media is under direct or de facto state control. Alternative points of view are rarely heard.

The opposition leader Alexei Navalny has been repeatedly jailed and barred from elections on trumped up charges. Peaceful protests are routinely banned or violently suppressed. Workers who organise for better wages and conditions end up sacked, as just happened to union activist Prof Maxim Balashov at the Moscow Institute of Physics & Technology.

The Kremlin uses kompromat (compromising material) to discredit its critics, including fake fraud and child pornography allegations, with the latter charge being pressed against Yury Dmitriev. He documents the Stalin terror to the displeasure of the current Russian government, which seems intent on rehabilitating the great tyrant.

I oppose all these human rights abuses but when I went to Moscow last month for the World Cup, I decided to focus on one almost forgotten issue: to call out the Russian and Chechen regimes over anti-LGBT+ persecution. In Chechyna over the last year, known or suspected gay men have been rounded up, held without trial, tortured and sometimes murdered.

President Putin is the leader of all of Russia, including Chechnya. He could stop the anti-gay ‘pogroms’ there but has failed to do so. He could also authorise the arrest of the right-wing extremists who target LGBT+ people for violent attacks. Again, he chooses not to. He furthermore bears direct personal responsibility for the 2013 anti-gay law, which outlaws the so-called promotion of homosexuality. He supported it and still defends it

I did not want to see Putin score an unchallenged PR victory during the World Cup. Russia should never have been granted the right to host this prestigious tournament, given the country’s appalling human rights record. There can be no normal sporting relations with an abnormal regime.

So to make my point I staged a one-man protest near the Kremlin, holding up a sign stating: “Putin fails to act against Chechnya torture of gay people.” Within a couple of minutes, the police arrived. They claimed that even though the Russian constitution guarantees the right to protest, it is superseded by Presidential Decree 202 which bans all protests for the duration of the World Cup. I responded to the police that not even President Putin has the right to void the constitution. They said he was the law.

I was taken to nearby Kitay-Gorod police station. Unlike in the past, I was not roughed up or abused. But I was worried that I might be detained in cells overnight with violent criminals and neo-Nazi extremists. Some of the senior officers were very unfriendly. I feared that they were intent on throwing the book at me. In the end, I got off lightly and was released after being detained a mere one hour and forty minutes. If a Russian citizen had done my protest, he or she could have faced a massive fine and 15 days in prison.

As a condition of my release, I was required to sign 10 pages of documents in Russian that I did not understand, and I made this clear under my signature. I was due to appear in a Moscow court on 26 June, accused of an unlawful protest in violation of Presidential Decree 202. I did not attend, having left Russia in advance of the court date. My big concern is that I could face arrest for non-attendance if I ever go back to Moscow.

This wasn’t the first time I’ve been arrested in Russia – it was the third. In addition, in 2007, at the second attempted Moscow LGBT+ Pride, I was beaten almost unconscious by far-right extremists acting with apparent police collusion.

Why do I take these risks? The persecution of LGBT+ Russians and Chechens is what motivated my protest. More than a year after the Chechnya anti-gay witch-hunt began, there’s still no justice for the victims. Indeed, the Russian and Chechen authorities refuse to acknowledge that a witch-hunt has taken place.

I am inspired by the courage of the LGBT+ activists who risk their liberty and lives to defend human rights. I was there to support their struggle. Members of the Russian LGBT Network and other Russian activists are extraordinary people. I am glad that I helped to shine a light on the homophobic oppression in their country. The fight goes on.

• Peter kindly provided us with the above photo of his arrest.