In the 1980s and 90s the union bureaucrats and Labour leadership piled up pressure to silence their left-wing critics. They demanded unity against the Tories.

Don’t criticise Kinnock, they lectured. Any open criticism, they told us, would be a gift to the right-wing press. They pointed to the divided party in 1983, the split between Bennites and the traditional Labour right, and blamed the catastrophic 1983 election defeat on “internal divisions”.

It was demagogic, of course. Kinnock wanted an easier ride – he was Labour leader and he wanted his socialist critics to shut up, which would relieve him of the tiresome job of replying to our concerns. Kinnock was busy repositioning Labour to the right and smashing up centres of opposition in the party. For example, he witchhunted the left, including outlawing the newspaper Socialist Organiser in 1990, he effectively abolished the Militant-dominated Labour youth organisation in 1987, and allowed Labour Students to be shamelessly gerrymandered by the Right. 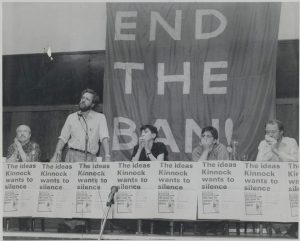 Corbyn campaigning against the Kinnock leadership’s ban on Socialist Organiser, 1990

Nevertheless, the Kinnockites’ rhetoric was effective with many. The demand for unity had a certain grip because – after the experience of Thatcherism in the 1980s – the labour movement was desperate to get rid of the Tories.

‘Unity’ is a powerful idea, and workers know its importance. We stand together on picket lines, we march together in demonstrations.

What should not be demanded, however, is our silence.

And, anyway, letting Kinnock get away with running his own project didn’t work. Kinnock messed up and lost the very-winnable 1992 election and, later in the 1990s, Blair took Kinnock’s project to the next level.

Now Corbyn’s close supporters in the unions, Momentum and the Leader’s Office are using Kinnock’s old argument: don’t criticise the Leader, give him a free hand against the Tories. Unity!

All the little sycophants, many looking for jobs, are beginning to join in. No criticism of Corbyn’s policy! But others are convinced too.

The first problem is this. It is certainly not clear that, despite the Tories’ disarray, Corbyn’s policy of waiting until they implode on Brexit will work to guarantee a Labour victory. The socialist left must take up the debate about how the election must be fought and won, in order to ensure we do win.

Labour began to gain support in the last general election because of a surprisingly radical manifesto.

We need to assert the need for clear bold initiatives: abolish Trident and spend the money on abolishing student debts; radically increase tax rates on the rich to pay for rebuilding the NHS; cut the working week without loss of pay to end unemployment; massively increase the minimum wage. Make these and other announcements, and then take to the streets and campaign for them.

We need to correct some of the mistakes the Labour leadership is making on Brexit. And that cannot be done by remaining silent.

Labour must stop triangulating its Brexit policy – which has produced a messy confusion of shifting announcements – and take a stand on principle: Brexit is wrong, free movement is right. Labour needs to re-orientate – in order to win votes and to do what’s right.

We are now being told Brexit should not be debated at Labour Party conference. Apparently to debate the issue will embarrass Corbyn. But if Corbyn wants to avoid embarrassment he would do better to come up with a coherent policy.

We need a clear, internationalist policy that opposes Brexit and guarantees free movement of people.

If Labour does win the next election and then proceeds to disappoint those who have waited so long for a radical government, it will spread demoralisation in the labour movement. It will also prepare the way for a right-wing, populist backlash.

There is a very big gap between what Labour is promising and what we need.

For example, Labour is not promising to abolish academies and free schools and place all schooling under Local Education Authority control. The thousands of teachers who both work in academies, and who are Labour Party members, are not going to shelve our aspirations just because Angela Rayner has declared the discussion over.

The trade unionists who come up against the anti-union laws under a Corbyn government will not be content with the abolition of only the most recent Tory law. And why should they? All the Tory laws from the 1980s and 90s should go and be replaced by a positive right to strike.

There are very many issues of a similar order.

To those who say Corbyn can’t do everything at once, we will say: please, no excuses. What we require is a clear programme to act in the interests of the workers. The utilities and banks need nationalising, the rich need taxing heavily, the trade unions need freedom.

If Jeremy Corbyn acts against capital we will back him. If Corbyn’s enemies on the Labour right subvert him, we will defend him against the right.

But the role of the socialist left is to continue to speak out for the interests of the working class and the socialist alternative to capitalism.

Leave a Reply to The Clarion editors Cancel reply