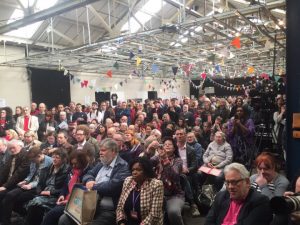 In March 2017 The Clarion reported on the “conference” – in fact a dayschool – Momentum held to replace its actual conference, which the coup organised to overthrow the organisation’s democracy had cancelled. A lot of what was written in that report will very likely apply to the second “conference” Momentum is holding this Sunday, 14 July, in Durham, the day after the Miners’ Gala.

The publicity for the conference sets out three aims: “get skilled up and hear from some of the movement’s most inspiring speakers”; “get to know other Momentum supporters from across the country”; and “celebrate everything we’ve achieved”. In other words, there will – naturally – be no democratic decision-making or indeed decision-making of any sort. In fact, judging by last year’s “conference” there will be no real political discussion either – the agenda will be set up to avoid any opportunity for general discussion on Momentum’s or Labour’s direction.

There seems to be an element of going through the motions – tagging the “conference” onto the end of another event, clashing with the World Cup Final and booking a really pretty small venue (Durham town hall cannot hold more than a few hundred people at most). Then they can say they’ve held a “conference” but minimise the chance of anything escaping the office’s control.

Once again Momentum is normalising a left-wing version of Blairite-type organising – vacuous, manipulated show events providing cover for everything to be organised and decided behind the scenes and from the top down.

The Blairites also preferred stage-managed conferences and top-down decision making to keep out the ‘cranks’ and the ‘ultra lefts’ – rather than engaging in political argument. Sadly some on the left seem to have learnt all the wrong lessons from the years of Blairite command-and-control in Labour.