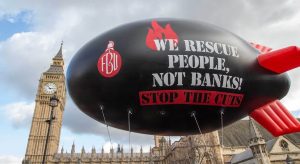 By an RMT activist

The AGM of the RMT union (24-29 June, Edinburgh) has passed policy calling for public ownership of the banking and finance industries.

The motion, submitted by the union’s Bakerloo Line branch, commits the union to promoting the policy amongst its Parliamentary Group, and to campaigning for any future Corbyn-led Labour government to take the banks into public ownership.

The policy is also held by the Fire Brigades Union, which published a pamphlet promoting it entitled It’s Time To Take Over The Banks (available online here), and was endorsed by the TUC in 2012. Labour’s current policy talks about creating a publicly-owned “National Investment Bank”, but stops short of committing to the full nationalisation of the sector..

The RMT AGM also passed policies committing it to mobilising its members for upcoming demos protesting Donald Trump’s visit to the UK on 13 July, and against the far-right’s planned mobilisation in support of Tommy Robinson the following day.

1) Since the financial crash, the bankers who caused it have received more than £120 billion in bonuses, while austerity has continued for our class.

1) That, in line with our policies on the railways and other public services/utilities, democratic public ownership is the only way to guarantee proper regulation of the banking and finance sector, and to ensure its vast wealth is spent in the interests of social need rather than profit.

1) To support the policy of nationalising the banks.
2) To write to all MPs in our Parliamentary Group informing them of our support for this policy.
3) To work with other unions and political organisations to raise the profile of this policy and to campaign for it as part of a wider campaign for widespread social ownership of services, utilities, and industry.
4) To campaign for a potential Corbyn-led Labour government to implement this policy.