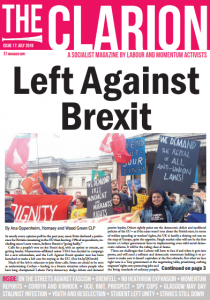 Contents include:
• Left against Brexit, by Ana Oppenheim • The speech Corbyn should give on Brexit • The far right emboldened, by Rebecca Lawrence • Labour and the unions should put thousands on the streets, by Sacha Ismail • Poetic justice? by Janine Booth • Matt Wrack on Grenfell • Labour must oppose Heathrow expansion, by Rosalind Ives • On hunger strike to persuade Labour, by Matt Lepley • Leeds Momentum suspended, by Dave Kirk • London Momentum groups organise, by Rosie Woods • Leyton and Wanstead win at AGM, by a new committee member • Southampton Momentum weekend school •  Shut up and don’t criticise? Kinnockism and Corbyn, by Mark Osborn • Arguing for the right to strike, by Ali Crabtree • Rank-and-file revolt in UCU, by Rhian Keyse • RMT narrowly votes against reaffiliation, by a Tube worker • Asking right questions about the police, by Dan Davison • May Day in Lisbon and Glasgow – lessons for the left, by Mike Wiliamson • Abortion victory in Irish Republic: what about the North? by Leonie Hannan • The Labour right: what a state, by Tom Harris • Are you suffering from Stalinism? by Simon Hannah • Strikes: darkness before a dawn? by a McDonald’s worker • YOUTH PAGES: Why Lewisham Young Labour was shut down, by Maisie Sanders • Mandatory reselection will benefit young people, by Lily Madigan • Student solidarity statement – Unite the left