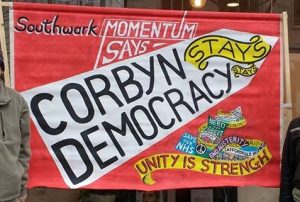 Camberwell & Peckham, Harriet Harman’s constituency, swung decisively to the left at the AGM on 21 June, with 12 of the 15 CLP officer positions being won by Corbyn-supporting candidates.

This was the result of patient work carried out since the last AGM in November 2016 saw the right take every position.

Our strategy was to set up local networks of Corbyn supporters in each branch, meet up on an informal basis in pubs, coffee shops or people’s homes, push politics onto the agenda at branch meetings by raising motions on contemporary issues and keep as many people as possible in the communications loop by sending out newsletters using the Momentum national database.

We had started winning the political arguments even on the old, right dominated General Committee, where resolutions against the witch-hunt, against ‘social cleansing’ redevelopment proposals and in support of trade union disputes were passed, however when it came to elections social networks were harder to break down and more long-standing members tended to revert to the candidates they knew.

We knew the key would be the branch AGMs, where GC delegates are elected. We planned for these, phoning and e-mailing our contacts to encourage them to turn up and if possible stand for election as branch officers and GC delegates. We came out of that with a 65/35 left majority of branch delegates, a reversal of the previous situation. Although that was offset somewhat by affiliate delegates (the local Co-Op Party branch in particular appears to act as a means of getting right wingers onto the GC) we still had a clear paper majority.

Ahead of the CLP AGM we held an open meeting to finalise our slate of candidates and agree a short manifesto for general circulation, setting out what changes we wanted to make to the CLP in terms of increased democratisation, transparency and campaigning. We then e-mailed all known left delegates to stress the importance of attending, and outline what the key votes would be and who was on the left slate.

We decided not to stand for all positions and in particular not to oppose incumbents we felt had done a reasonable job. Within that, we stood our strongest candidates who had a proven track record at branch level. As it turned out, this not only won votes from the centre of the party, the right didn’t even put up candidates in several cases and ours were elected unopposed.

Where positions were contested, we won comfortably, and we also elected left delegations to Labour Party Annual Conference and to the Local Campaigns Forum.

There are two stories here. One is our own organisation, which was more effective than before, with lessons learned; in particular the importance of contact work over time at local level. The other is the demoralisation of the right. The failed Owen Smith leadership bid and the ‘Corbyn surge’ in the general election seems to have taken the wind out of their sails to a large extent, and they simply did not organise this time in the way they did previously. Although some Blair disciples remain, there seems to be a view among the more pragmatic centrists that the left needs to be included – I suspect particularly since that shares out the workload.

The fact that councillor elections have passed with most ‘New Labour’ councillors reselected and re-elected may also have played a part, but more generally the tide of change in the Labour Party is continuing and Camberwell & Peckham is no longer a Canute-like hold-out.

Our task now is to run the CLP in the way we promised. This will be hard work, but it’s why we stood and we’re up for the challenge. We don’t intend to carve out the party right in the way they did to us. Rather, we aim to be genuinely inclusive and transparent and to work with everyone who’s prepared to engage constructively to build the party locally and campaign for a Corbyn Labour government.

• For the platform the comrades ran on and their slate, see here.